(CMR) Several members of the Concerned Citizens Group have contacted the National Roads Authority about what they say is a “dangerous obstruction” being built on Mary Mollie Hydes Road in West Bay by a homeowner in the area. This is the second time in recent years that the homeowner has allegedly encroached on what is believed to be West Bay's oldest public roadway without any apparent permission from the respective government agencies.

This housing structure has left many to wonder how the Planning Department and Central Planning Authority approved a house with no apparent setbacks as required by law. By their actions, the homeowners appear to want to create their own setback but objectors say they are doing so in the actual road itself or so close to the roadway it is creating a danger to road users.

The homeowner has constructed some sort of concrete enclosure prompting official complaints to the NRA, Planning and others. The National Roads Authority Board Chairman, Alric Lindsay, referred the matter to the NRA management team after reminding the complainants they are responsible for the day-to-day operations at the NRA; not the board itself. 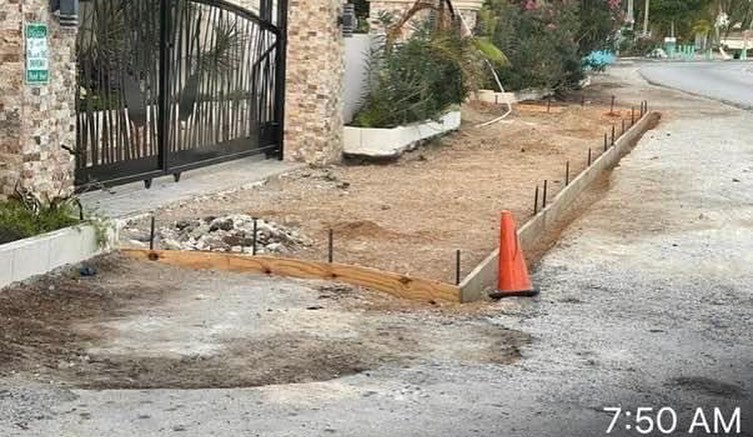 In a written response to CMR, he noted that the National Roads Authority is aware of the complaints from members of the public which he confirms was received via email on Monday, December 20 from Jenny Manderson and Ezmie Smith.

Manderson noted her concerns and provided photos of the road obstruction which were taken that morning. Manderson raised the alarm out of what she says is a concern that this latest obstruction makes it “difficult and more dangerous for traffic heading west” and attempting to merge with the main road.

Ezmie Smith, an Executive Member Concerned Citizen Group, also sent an email that same day to a staff member at the NRA regarding the same concern. Lindsay shared that the nature of the complaint may actually involve multiple agencies which have all now been made aware of the concerns. He noted that a collaborated response may be needed.

On December 22, the NRA’s deputy managing director, Julie Campbell, arranged for photos to be taken of the area. That same day the NRA’s transportation director contacted the Deputy Director of Planning, attaching photos and requesting confirmation of what the latest construction activity entails.

The deputy director of planning confirmed to the NRA that he was not sure what the works were and it was not something that came through the Department of Planning.  The Deputy Director of Planning therefore said that a Compliance Officer would visit the property and find out what is happening. The the NRA is currently waiting for the findings of the Planning Code Enforcement Officer on this matter.

In December 2019 the same homeowner placed landscaping that including big rock boulder and several adult palm trees in the front of their wall. Smith, a property owner in the area, issued the alarm at that time also and they were forced to remove the beautification project the following month. It was since replaced with much smaller flower beds.

The primary issue appears to be that property is ring on the roadway with no setbacks. This current structure goes out significantly beyond what was permitted back in 2019.

No, thanks.
How do you feel after reading this?
Tags: Mary Mollie Hydes RoadNational Roads Authority