VOTE: Do you think government should lobby against entities using our name negatively?

Vote in our pole today!

by CMR
in Polls
0

(CMR) A recent AT&T commercial has Caymanians seeing red after it mentioned the “Caymans” as a dodgy place for a “tax preparer” gone rogue.

Many persons on social media have commented that they do not believe the commercial is funny and that the Cayman Islands government should start taking more direct action against our country's name being used in such a derogatory manner in commercials and movies/tv series. 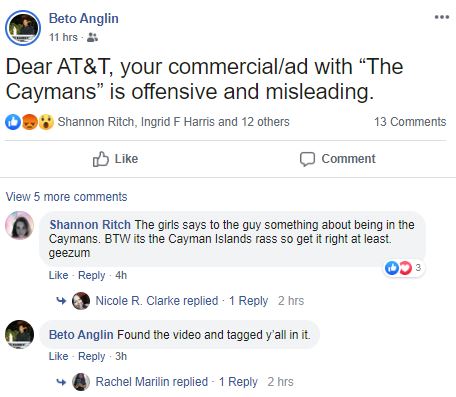 How do you feel?

The advertisement, titled ‘OK tax professional’ was first mentioned in the post and the Cayman Islands government decided to take action based on public outcry. AT&T claims the advert was meant to be humorous. However, The Financial Services Ministry indicated it was waiting on a formal response from their legal department.

The ministry was pleased with the update and noted that Cayman Islands’ financial services “are provided in accordance with international financial standards and the (Organisation for Economic Co-operation and Development) rankings place the Cayman Islands on par with other countries, such as Canada and England, for transparency and tax information sharing. Any insinuation to the contrary is wrong and inaccurate.”

In November Minister Rivers said that she would directly address such erroneous adverts that wrongly portray the reputation of the Cayman Islands.

POLL: How do you feel about the self isolation breach?
POLL: Is Cayman ready for the phased border re-opening on October 1?
POLL: Should McKeeva Bush be removed as Speaker?
Poll: Should government implement a travel ban for China?
Share your vote!

No, thanks.
How do you feel after reading this?
Tags: reputation

POLL: How do you feel about the self isolation breach?

(CMR) Participate in the latest poll question about re-opening our borders!

POLL: Should McKeeva Bush be removed as Speaker?

(CMR) In light of the events this weekend where a bar manager was assaulted we are running the following poll:...

Poll: Should government implement a travel ban for China?

(CMR) The Ministry of Health held a press conference this morning amid concerns that several persons have traveled via numerous...

POLL: What is your preference for Cayman News?

(CMR) Numerous local agencies have conducted media consumption surveys attempting to obtain data on what media source the people of...

(CMR) The upcoming public holiday for the now-canceled referendum day is causing a lot of employers angst as they are...