(CMR) Seven people are dead and three missing after a slab of a cliff broke off Saturday afternoon and crashed down on their boat in Brazil. There were three tourists boats in the lake at the time of the incident and dozens have more have been injured at the popular tourist destination in Minas Gerais state.

The tourist boats were navigating through a canyon in Lake Furnas, near Capitolio City, Brazil, when a massive slab of rock broke away on Saturday from the canyon wall and and toppled onto pleasure boaters.

Video images showed a gathering of small boats moving slowly near the sheer rock cliff on Furnas Lake when a fissure appeared in the rock and a huge piece toppled onto at least two of the vessels.

The incident took place at Lake Furnas, a popular tourist spot roughly 260 miles north of Sao Paulo, around 12:30 p.m., according to the Minas Gerais state fire department. The Brazilian Navy and local firefighters were deployed to the scene to help the victims. Officials said at least 32 people were injured, though most had been released from hospitals by Saturday evening.

Romeu Zema, the governor of Minas Gerais, tweeted updates on the incident during the afternoon and said heavy rains were a factor in the cliff collapse. The rescue efforts were ongoing, Zema tweeted.

The heavy rain had caused flooding in the state and caused 17,000 people to evacuate from their homes. Last year, Brazil experienced the worst drought in 91 years which made officials use the water flow from the Lake Furnas dam.

Furnas Lake, which was created in 1958 for the installation of a hydroelectric plant, is a popular tourist draw in the area roughly 420 kilometers (260 miles) north of Sao Paulo. Officials in Capitolio, which has about 8,400 residents, say the town can see around 5,000 visitors on a weekend, and up to 30,000 on holidays. 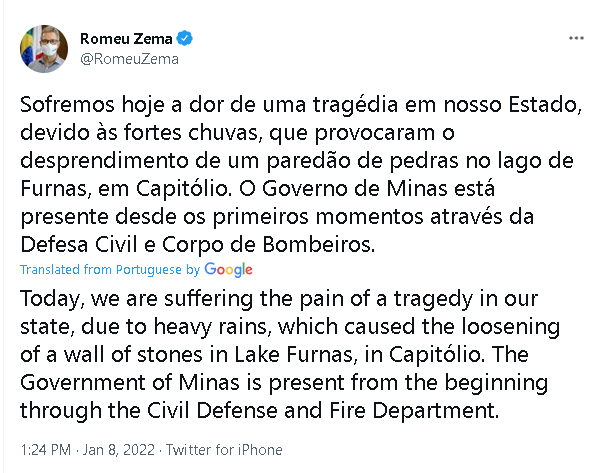 The Brazilian Navy is overseeing the investigation into what caused the collapse, according to authorities.