Jeep Grand Cherokee on fire in front of Lobster Pot Restaurant – avoid the area if you can! No emergency vehicles were yet on the scene.

Photos below show how quickly the fire got out of hand but thankfully there were no injuries.

CMR exclusive sources who were there as it began indicated that the male driver of the vehicle was coming out of Kirk's Supermarket onto North Church Street and the could see the fire under his vehicle at that point. They attempted to tell him to get out of the vehicle once they noticed the seriousness of it. He saw smoke from under the hood and proceeded to pull over.

The eyewitnesses attempted to call 911 but received no response to their call. At the time a patrol car was passing by and that stopped to assist him and a man from the dive shop also ran to help with a fire extinguisher. Despite that, the fire quickly got out of hand and the vehicle was engulfed in full blazes as can be seen below. Eventually, fire rescue was on the scene and the fire was extinguished. The cause of the fire is believed to be electrical and no foul play suspected. 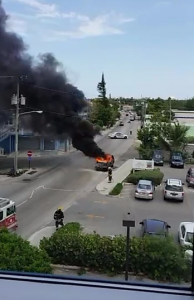