(CMR) The children of the late Robert Hamaty, owner of Tortuga, are suing others including his wife and nephew. The Writ of Summons was filed on Tuesday, August 17 on their behalf by attorneys Mourant Ozannes.

According to the general endorsement, daughter Monique Catherine Hamaty-Simmonds and son Basil Norman Hamaty, was granted probate of the purported Last Will and Testament of the Deceased dated June 5, 2009 (the 2009 Will), in January 2021 for Cause Number P154 of 2020 along with his wife, his brother in Jamaica and his nephew. 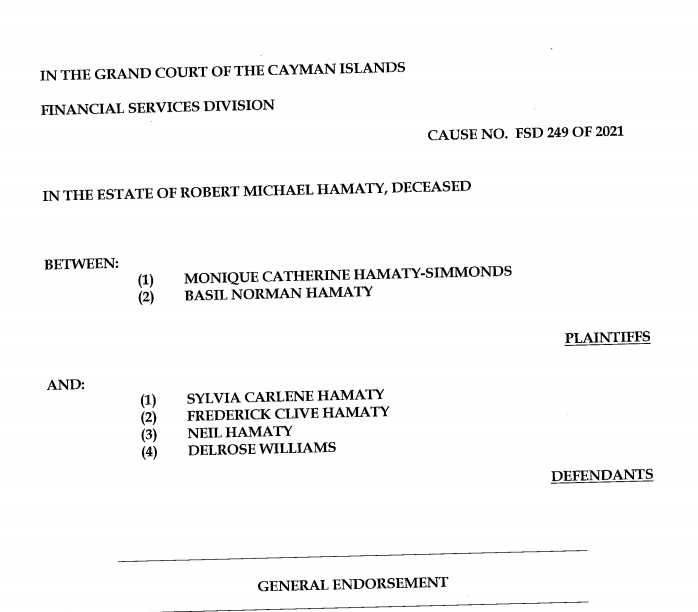 The brother, Frederic Clive Hamaty lives in Jamaica and is an attorney at law. The Third Defendant is Neil Hamaty, his son and is the property manager at Tortuga and has worked for the company for many years.

His children are named as beneficiaries under both wills and are seeking an order (1) that the probate of the 2009 Will granted to the Plaintiffs, The First Defendant and the Second Defendant on January 2021 be revoked (2) The court makes the 2019 will and 2020 Codicil valid (3) costs be ordered.

Hamaty owed and operated Tortuga Liquor retail stores and associated rum cake company for many years after retiring as a pilot. He was married to Mrs. Carlene in the early 1980s before forming Tortuga Rum Company Ltd. in 1984. They introduced the first rums of the Cayman Islands to appeal as a souvenir to the growing tourist and cruise passenger business.

His daughter works as the Chief Marketing Officer for Tortuga International which is now part of Jamaica Producers Group of companies and has bakeries and operations in Grand Cayman, Jamaica, Barbados and the Bahamas. His son, Basil Hamaty, is a captain for the national carrier, Cayman Airways.

In 1987, they opened the first Tortuga duty-free liquor store and later that year introduced the now world-famous Tortuga Caribbean Rum Cake. Hamaty credited his wife for coming up with the world-famous rum cake recipe which was said to be a family heirloom.

No, thanks.
How do you feel after reading this?
Tags: Basil HamatyRobert HamatyTortuga Liquor Store

(CMR) Rogue neighbors, Wilson Jonathan Mendoza and his wife Deaven Ann Mendoza, have been threatened with being jailed, fined or have...