The undoing of CINICO’s CEO – what finally broke the camel’s back?

(CMR) Cayman Marl Road has undertaken an extensive investigation after the unexpected termination of CINICO CEO Lonny Tibbetts earlier this month. In fact, we had started investigating numerous complaints regarding the CEO from May, 2018.

The people of the Cayman Islands have been waiting in vain on some form of additional explanation on the termination of Tibbetts. Since none have been forthcoming, we have decided to post the findings of our investigation. They are 16,000 persons on CINICO – the largest health services provider in the Cayman Islands. So it is not a surprise that people wish to know what transpired.

There were a plethora of issues that could have lead to his eventual termination. Instead of speculating as to which incident may have been the proverbial straw that broke the camel's back; we have decided to simply provide the details as we have obtained them. The public can then come to their own conclusions.

On Friday, October 5th CINICO staff were sent home early and the board took control of Tibbett's computer and work issued phone. Within days he was terminated from his post.

It appears that the CEO has a penchant for hiring people without following any professional standards or protocol. People who wanted employment would simply approach him and were told to show up the following day to begin their employment with the organization. There was no assessment of whether or not those individuals were actually needed or justification for the posts. There were no applications completed, no advertisements or due diligence carried out. The organization had no human resource manager or general manager with hiring experience. Tibbetts took on this role himself and appeared to hired on a whim. 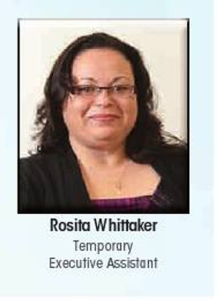 At least 10-12 people were hired in such a manner including Tibbett's own sister – Kerry Horek Tibbetts-Whittaker in 2014 as an Administrative Assistant name Rosita Whittaker. No one knew her by that name because it was her middle name and a newly acquired married name.

In an oddity he included her in a display newspaper advertisement celebrating the organization's 10th anniversary. When people saw the photograph apparently there was some public outcry on the matter. The board instructed him to let her go shortly after members of the public realized the obvious conflict of interest.

This non-Cayman staff member was allowed to accrue a significant amount of overtime as she pleased and it was paid without question. Interestingly, the overtime was not billed to the agency but paid directly to the individual from CINICO's payroll. Eventually she was hired on directly by CINICO.

These PAs experienced an unprecedented amount of favoritism and perks that caught the attention of numerous other staff members. They were given anything they desired including computers, cell phones and personal money.

In return, he entrusted them with details of his personal life including sexual conquests at the office and elsewhere. One steady personal companion was maintained in Honduras with an apartment and other benefits. These staff members facilitated that relationship on CINICO time. The PAs were also asked to purchase personal items such as lingerie for the CEO to gift to female companions.

Staff were aware of the constant fights in the relationship especially when she would be locked out of the apartment in Honduras and ensuing outbursts. As a result of the tumultuous nature of the relationship frequent and “urgent” trips were often required on short notice.

One PA's daughter was also hired into the organization to work on “a project”. One day she showed up to CINICO but no one knew the project she was to be working on or that she had even been hired.

This was an ordinary occurrence. There was no job description, no application forms or due diligence carried out on any of these individuals. One young man was hired and became the personal gofer for the CEO – running all of his personal errands whilst on CINICO's payroll.

Those were were not on the favorable list were denied promotions and at times pushed out of the organization entirely.

There were also concerns about Tibbetts and his own worth ethic as CEO of such a large organization. It was unusual that he would spend a full day at the office focused on CINICO's work.

As stated, there were frequent trips to Honduras for personal reasons and he used Cayman Airways CINICO frequent flyer miles for his personal travels. We understand that at one point, the frequent flyer accumulated mileage was well over 1 million. Miles are accumulated from all persons who have CINICO and are sent overseas for medical treatments.

For several years, staff received Christmas miles as part of an office pool.

The Brac office which contains a 1 bedroom apartment (with 2 beds) was often manned by the CEO as he attended to his personal affairs on the Brac. It's reported that he found time to open and operate a local restaurant there.

Staff complained that they seldom saw him “work” a full day and odd late night hours were kept with non-CINCIO staff in the building. In fact, his female companion was known to use the shower facilities on a regular basis when she visited from overseas.

His office was outfitted with comforters that were allegedly used for various extra curricular activities with female companies. It appears to be common knowledge to staff what was going on in the office after hours. He would share photos with staff and confided a great deal to one of his PA's about his various conquests.

As is often the case, these photos were not kept in confidence and were shared with others. There was one picture in particular that displayed a woman's private area with a credit/debit card in the foreground. The hand in the photo can be clearly identified as Tibbetts as his finger covered the name on the card.

There were multiple break-ins at the CINICO office including one instance in which CI$8,000 was taken. Despite the matter being reported to the police they were instructed to halt the investigation and no one was ever apprehended.

The favoritism did not apply to just staff members receiving gifts. It also extended to preferential medical coverage for procedures not ordinarily covered by CINICO.

Some instances included known cases of collusion and potential fraud with physicians; who claim that a patient “may have” a particular illness. No independent verification or finalization of a diagnosis was ever forthcoming but the person continues to receive a monthly stipend.

There is one case where a pensioner is obtaining a $2,000 monthly payout under the home health care benefit. This person is able bodied enough to drive herself to the CINICO office and demand her monthly payment. Her authorization was approved years ago and she continues to receive this benefit without any independent scrutiny. Whilst there is a board that authorizes who should receive this benefit; Tibbetts is solely responsible for determining and approving the payout amount. This person happens to be closely related to one of his PA's.

In another case, one of his personal PA's decided to have a tubal ligation procedure done and at the same time received approval to do a vaginal repair/rejuvenation procedure to tighten her vagina.

In another cases a former co-worker from the labour department that he had a personal relationship with received a cosmetic breast augmentation procedure fully covered by CINICO.

In 2015 CINICO settled $1.5M for two overseas lawsuits against them for an undisclosed amount. That accounted for outstanding bills for 10 Caymanians that received treatment overseas.

It may have been a clear indication that something more was amiss to anyone with a keen eye. In fact, CINICO system problems have persisted for many years. Disgraced HSA board chair Canover Watson bore the brunt of the fallout over his failed CarePay system. How research shows that government continues to lose millions of dollars because of poor procedures at CINICO that can be linked directly to the decisions made by the CEO.

Tibbetts had a reputation for being extremely unprofessional and explosive with his vendors. At times, third party administrators would visit the Cayman Islands only to be subjected to meetings where they were cursed at and belittle. Eventually many refused to come back and deal directly with him.

One contacted by CMR noted:

“The unprofessionalism and constant use of profanity was something we are not used to. We expected more from a business partner but after a while it was accepted that anyone dealing with him had to tolerate this behavior. Many managers refused to do so. We were often threatened with the termination of contracts”

In may 2017 Tibbetts actually terminated the HealthX contract and brought in a new system for handling claims processing and adjudication.

The Health Services Authority was not notified of this and as a result there have been countless errors that persist to this day. HSA is essentially still using the outdated system and relying on data from May 2017.

Claims are coming in for people that have long left the civil service and are no longer eligible but still receive the CINICO benefits.

The providers of this system came once and refused to come return. There was no transitional period where one system overlapped with the other. As a result, CINICO administrative staff were left to figure out this system largely on their own. To this day, the issues persist and as a a result various financial managers within government are now refusing to pay CINICO invoices. In one instance the Ministry of Education refused to pay almost $1 million in claims:

This reliance on outdated data is also causing loss of revenue at the Health Services Authority.

Shortly after being appointed as CEO of CINICO Tibbetts decided to undertake a significant expansion effort. CINICO acquired the Airport Centre acquisition and men were hired to carry out the expansion and renovations.

The persons that were hired were allegedly from Tibbetts's previous construction company. There are accusations of serious over billing with no financial oversight. Invoices were created by Tibbetts and then given to the construction company to bring into the office. In one instance his handwriting can be seen on the invoices with a notation to pay it immediately.

Staff were instructed to pay the invoices immediately without question. The workers would charge exorbitant fees for even the most menial tasks. CMR has invoices for payment of over $200,000 to two companies: CayStar and First Class Construction.

It was difficult to ascertain the exact billing that occurred from First Class Construction as there was only a handwritten note accounting for over $108,000

In the end, it is alleged that his own trusty PAs was the cause of his downfall; and provided the necessary evidence to put an end to this situation. Many questions linger: