Soreness at injection site top side effect of vaccinated in Cayman

(CMR) The Health Services Authority has kept detailed information on reported side effects from vaccine doses administered in the Cayman Islands which CMR recently obtained. The vast majority of people have reported soreness at the injection site as the most commonly experienced side effect with no reported deaths or hospitalizations associated with the vaccine the report shared.

The information was received at the end of August and tracks 99,886 doses that have been administered since Cayman began administering vaccines on January 7, 2021. Of those doses given 24% have reported some side effects with 35% reporting soreness at the injection site. The information is divided into side effect symptoms with people being able to select up to 7 symptoms for each report.

The vast majority of those symptom categories account for “the 7 most common symptoms” for vaccines including soreness at the injection site, muscles aches, fatigue, headache and chills. Some 97% of reported cases fall into the 7 most commonly reported symptoms.

There is a group listed as other which includes “symptoms that are vague or non-specific” and noted that they are not placed in any groupings and “they appear to be neither severe nor significant.”

On the more serious spectrum of side effects, there has been one reported case of lupus flare and one reported blood clot. The HSA confirmed that there have been no hospitalizations or deaths associated with vaccine administration. The results noted that “duration of side effects is varied, no-life-threatening side effects have persisted.”

The data was collected from self-reporting patients on return for the second dose and from reports submitted to the Flu Hotline or to practitioners providing care. and noted that “a possible causal relationship is best analyzed by looking at frequencies of diagnoses (not symptoms) in the general population and then in the subgroup of interest. This requires large studies in big countries where rare events can be spotted.”

CMR continues to receive reports from people claiming that “a ton of people are dying mysteriously” in the Cayman Islands and requested the data from the health authorities. However, the data actually shows that deaths are down by the lowest margin since 2010. Mortality rates were at a high of 3.6% for the midterm figures in 2019 compared to 1.4% for the same period in 2021.

Despite rumors of alleged covid related deaths being covered up no one has been able to supply a single example to support this statement. When CMR attempted to dig further we were advised that “the government is covering it up and telling people not to share that their loved ones have died because of the vaccine.” CMR has not been able to receive any insider information about any unreported vaccine-related deaths even from inside sources. 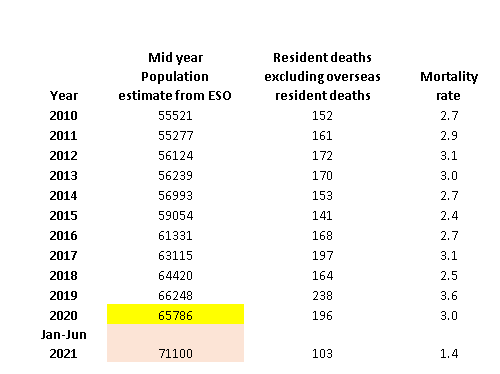 Speaking to independent sources like the funeral homes have also not supported these assertions. In fact, one funeral home employee shared that the idea of people dying and it being underreported or not reported at all is preposterous.

Several people have taken their concerns to social media blaming the vaccine received despite having no formal medical diagnosis to confirm their suspicions. In one instance a middle-aged man who claims to have myocarditis has refused to go to a local heart specialist to obtain a definite diagnosis.

In another instance, a story was in circulation about someone having an allergic reaction at the injection site. CMR contacted the alleged hospital and no such patient had been there nor did they have any records of anyone reporting such a reaction. Upon follow-up, the person was unable to provide a name or any other meaningful details about the person in question. In the end, it was impossible to determine if that person resided in Cayman or if the injuries shared were linked to any vaccination.

On the international front, a recent study published days ago in the Journal of the American Medical Association of 6.2 million people has confirmed that COVID-19 mRNA vaccines pose no serious health risks.

No, thanks.
How do you feel after reading this?
Tags: COVID-19 vaccines

(CMR) The US Centers for Disease Control (CDC) has advised people infected with monkeypox to avoid close contact with their...

COVID-19 cases and testing decline in the Cayman Islands

(CMR) COVID-19 case detection and testing continue to decline in the Cayman Islands, the Public Health Department has reported. According...

(CMR) Health City’s orthopedic surgeons are the first in the Caribbean to have access to the Intellio Connected Tower Solution...

DEH Laboratory on its way to International Accreditation

5 ways to lower your A1C

(CMR) Managing diabetes can be very challenging and usually takes commitment to seeing changes in your health. Home blood sugar...

More men in US get vasectomies as states ban abortion

(CMR) More men in the United States are seeking to get vasectomies as states move to ban or restrict abortions...