(CMR) Skylar Mack was arrested today for breaching quarantine and attending a jet ski event where several hundred persons were in attendance. Police and CBC officials arrived fully outfitted in hazmat suits to deal with the matter.

Mack has received out Jackass of the Day award after arriving on the island several days ago and deciding to remove her iMSafe bracelet and attending a sporting event today.

At their time of arrival, Mack was actually in the water on a jet ski and the police had to wait for her to return to land to be arrested. She was seen earlier in the day under a tent in close proximity with others and holding someone's child in her arms. We understand that she was staying at an apartment in the Newlands area alone and was approved for home quarantine at that facility.

Police have shared that Immediate action has been taken and RCIPS has detained the suspect under the Public Health Law. The traveler has been relocated to a Government-sponsored facility and will be monitored under 24-hour security detail, at the travelerâ€™s expense.

This matter is under investigation and a completed file will be sent to the Office of the Director of Public Prosecution for a decision. However, because Cabinet failed to implement the regulations passed a month ago until this past Friday she will only be subjected to a $1,000 fine.

The traveler in question tested negative on a COVID-19 test on arrival but had not yet completed their mandatory 14 day isolation period. Out of an abundance of caution the Travel Cayman Mobile Compliance team, in conjunction with Public Health, has started contact tracing and any residents found to have been in close contact with the traveler in question will be contacted.

Mack from Loganville, Georgia arrived in the Cayman Islands several days ago to support her Caymanain boyfriend at the National Championship jet racing event held this morning at South Sound Beach. The event was said to be attended with at least several hundred persons there.

A keen observer noticed Mack and made some inquiries before contacting the police about the matter and we understand she has been warned for prosecution. There are other concerns about the handling of this matter by Travel Cayman and health officials including their lack of attendance at the scene. 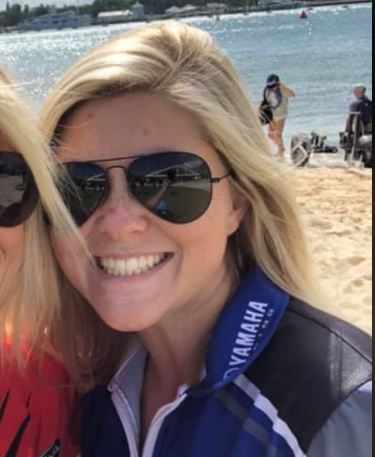 Cayman continues to struggle with persons breaching quarantine during this “phased” re-opening exercise.

Based on her social media posts she may have had COVID-19 already. She posted in late August that “I have antibodies now”:

T&T man chopped by daughter's boyfriend, 18-year-old on the run

Education institutions urged to get registered