Shandi Smith, an honors graduate from Coventry University, is the newest addition to the Protocol Office team.

After an open recruitment process which saw over 70 applicants, with 5 being interviewed, Ms. Smith has been appointed as Protocol Assistant, a position that directly supports the Chief of Protocol, Maloney Syms. Some of the responsibilities in her new position include providing support during official events, handling public queries, and assisting with airport courtesies for traveling dignitaries.

Prior to this position at CIG, Ms. Smith obtained a BA in Events Management and exercised these skills in a position with PricewaterhouseCoopers (PwC), providing assistance to senior staff.

The Protocol Office leads the organization, planning, and execution of many national and government events and ensures the Cayman Islands protocol is upheld according to international standards. The tasks handled by the Office include etiquette training, advice on correspondence, interaction with foreign dignitaries, advice on official gift-giving and receiving, along with official visits and VIP coordination. As the newest addition to the team, Ms. Smith says, “It is already very interesting and there are lots of new things to learn.”

Over the past 5 years, the Protocol Office has had a full-time staff complement of only 2 individuals and depends heavily on volunteers. With the significantly increased demand for protocol services, it was essential to add a new full-time member to the team. Earlier this year, in recognition of her role as the head of the unit, Maloney Syms’ job title was officially changed from Protocol Coordinator to Chief of Protocol, in line with international best practice.

“I am excited to add Shandi to our small but dynamic team especially as we begin to prepare for some of the major national events on our annual calendar,” Ms. Syms notes.

The first major project Ms. Smith will be working on is the upcoming Remembrance Sunday Parade and Ceremony, which falls on 12 November this year and is held annually in honor of our veterans who lost their lives serving in World War I and II.

Civil servants are encouraged to support the Poppy Appeal – the annual island-wide fundraiser which raises money for war veterans and their families and pays homage to the memory of those who gave their lives in defense of our freedom. 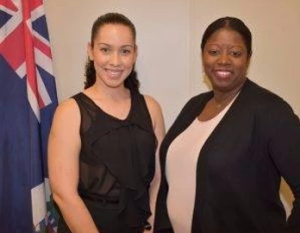 Poppies will be available until 12 November and can be found throughout the Government Administration Building, including both the main entrance and the staff entrance.

There are also opportunities to help out prior to, during and after the Remembrance Sunday Parade and Ceremony and with other events. If you would like to volunteer, please send your notice of interest to Ms. Smith at [email protected].

The next major event following Remembrance Sunday is the National Heroes Day Celebrations (22 January 2018). In light of her new role, and as a personal motivator, Ms. Smith believes in working hard and staying humble, saying, “I truly look forward to complementing the small team and seeing where my talents can contribute to the high standards that have been set over the years.”