Is this vote buying?

(CMR) The Minister of Health, Environment, Culture and Housing, Dwayne “John John” Seymour has issued a letter dated last week Thursday that approved $5,000 for roof repairs to a registered voter in Bodden Town East (BTE) and an employee under his ministry. Seymour is the MP for BTE and is seeking re-election in the April general election.

The woman receiving the benefit of the roof repair is a voter in Seymour's constituency. The recipient of the repairs is BTE registered voter Ms. Sharon Williams who resides in Belford Estates off Nashe Street. She also works in his ministry at the hospital and is said to have previously worked for him as his PA. Since the original publication of this story, it has been revealed that Williams owns six rental apartments at the location of the roof repairs. It remains unclear if it is her main residence that is being repaired or the rental units.

CMR understands that she has shared with others that she is not bothered about what others think of this transaction but she was offered the funds and gladly took it.

The repair company that is charging KYD$5,000 to repair a roof is owned by a former resident of BTE as well. However, he is now registered to vote in Prospect. Of interest is the fact that Everton Earl Vidal of 85 Jasmin Lane listed as a building contractor is a newly registered voter as of February 2021 on the revised list of electors.

He is also the godfather of William's son.

The letter which CMR discussed this morning on The Cold Hard Truth has left more questions than answers about what government funds were used for this project and what application process would have been undertaken by the applicant to get this approved. The letter is addressed to Multi-Built Construction, a company owned by Managing Director Vidal Everton.

CMR also understands that the National Building Society of Cayman sued the MD in February 2011 to take vacant possession of a property in Bodden Town within 28 days. 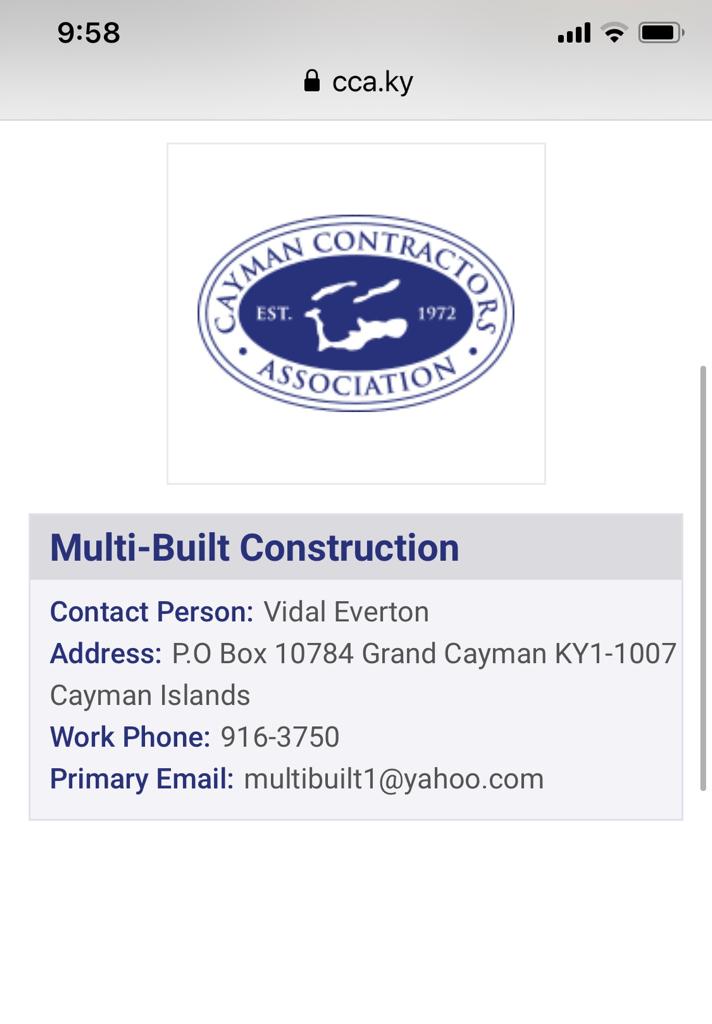 During an election time, this has many questioning if this is an example of preferential treatment towards a voter in the district. It appears to be an odd manner to assist a constituent, given that government has the Needs Assessment Unit that should be objectively betting applications through their process. Despite that, the letter makes it clear that the public purse is paying for this repair job and not Seymour personally.

The photographed letter does have words on the right margin that we cut off, and it is not entirely clear the full name of the account being used. Questions have also been raised about whether or not this is the appropriate ministry to assist with such a request, and this reminds people of the Nation Building Fund ran by former Premier McKeeva Bush. That fund has a number of scathing reports about the lack of transparency and other issues related to it.

Jamaican killed by husband in front of children in the US