38
SHARES
803
VIEWS
Share on FacebookShare on TwitterShare on Whatsapp

(CMR) Prime Minister of Antigua and Barbuda, Gaston Browne announced plans to liquidate the regional carrier, LIAT over the weekend. According to the prime minister, LIAT does not have sufficient assets to satisfy the requirements or claims of most of its creditors, including the airline’s employees.

All indications are that a new entity will be formed in its place once shareholders have met and will operate under this same well-known name of LIAT.

Dr. The Honourable Ralph Gonsalves, Prime Minister of St. Vincent and the Grenadines and LIAT shareholder issued a statement earlier today that stated the airline had been struggling since 2017 after a “devastating hurricane season”. COVID-19 has only compounded the issue further. 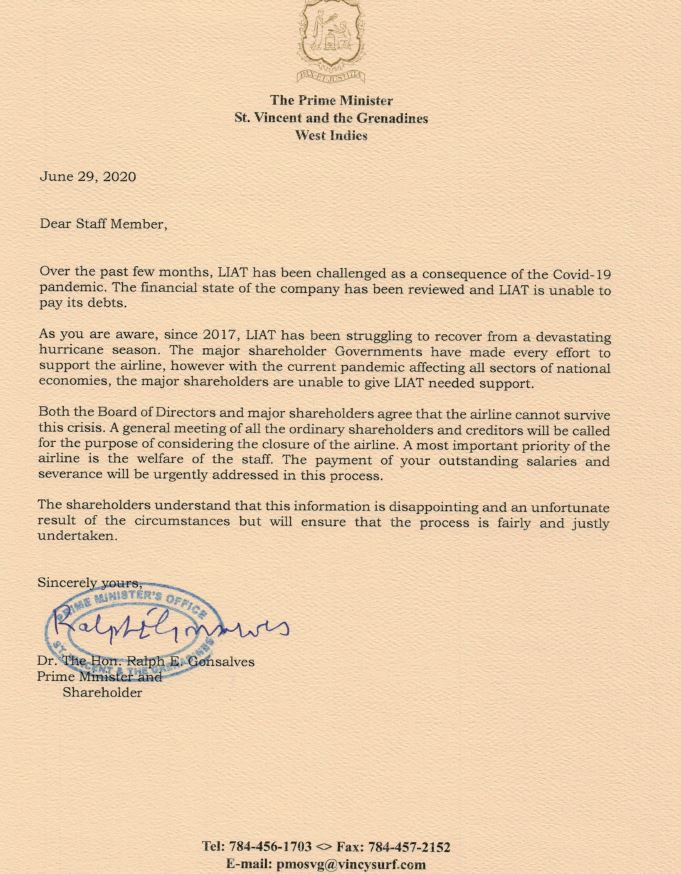 “COVID would have actually, let’s say increased the losses exponentially, so whereas in all of 2019 LIAT made a loss of about EC$12 million, that was within the means of the shareholder governments to subsidize,”

Over the past several months the planes have been grounded as continued lease payments were required. For some regional islands, LIAT is the only form of air transportation between them. It is the only service that Antigua and Barbuda has enjoyed within CARICOM (Caribbean Community) for several decades.

The airline only owns three planes with loans from Caribbean Development Bank, (CDB). It is expected that after that claim has been settled there will be very little left to liquidate in order to pay staff and other creditors.

It is expected the new entity will run a much leaner operation with fewer employees than the hundreds LIAT currently employs.

Leeward Island Air Transport was established in October 1956 in Montserrat by aviation pioneer, Sir Frank Delisle. He was the sole employee, operating one three-seater Piper Apache aircraft flying between Antigua and Montserrat.

In 1957 the airline extended its route structure to include St Eustatius, St Maarten and St Kitts. It also added one six-seater Beechcraft Twin Bonanza to its fleet.

In 1971 Court Line Aviation of the UK acquired control and renamed the airline LIAT and in 1974, ownership of the airline was acquired by 11 Caribbean Governments in 1974 and it was then renamed LIAT (1974) Ltd.