Proud of them finalists announced

Janelle is highly respected by her peers, family, and community. Janelle displays a loving and kind character. She encourages and supports all who come in contact with her. She has always excelled in academics from the early stages of primary school at Sir John A. Cumber Primary in West Bay where she graduated as a top student.

Janelle is a 2015 graduate from the John Gray High School. At graduation, she received many accolades and awards which included: Best report, which led to her receiving the Ernst and Young Award for Academic Excellence (recognizing her attaining a final total of 11 ‘O’ level equivalent passes including 10 – 1’s and 1-B, Level 2 Diploma with High Honors, recognition as valedictorian and being made head girl for her graduating year.

During high school, Janelle was president of the school’s Focus Christian Fellowship Club and she also participated in the Cayman Islands Youth Parliament as Minister of Financial Services, Commerce & Environment. Janelle was a Cayman Islands youth ambassador at the Global Young Leaders Conference (GYLC) in New York and Washington, DC. She was also selected to represent the Cayman Islands at the 2013 Next Generation Leadership Awards in Canada for Junior Achievement.

Janelle is a 2017 graduate from the University College of the Cayman Islands (UCCI) where she graduated with a 4.0 GPA and obtained an associate of arts degree (with Honours) in primary education. Whilst at UCCI she was on both the Presidents' and Deans' Lists twice. Janelle was also selected as a substitute teacher at UCCI during the Spring 2016 semester, where she was responsible for the supervision of a Spanish lab for mature students.

Thanks to a Government scholarship and partial funding from the National Council of Voluntary Organisations (NCVO), she is currently pursuing her bachelor’s degree in early childhood and education at Liverpool Hope University in Liverpool, UK.

She is a member of the Afro Caribbean Student Society and the student course representative for her early childhood seminar group. 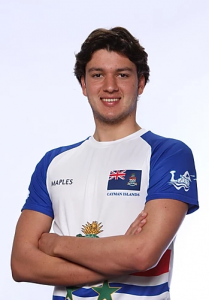 Jonathan is a freshman at the University of Indianapolis, majoring in mechanical engineering. He is a member of the Men’s Collegiate Swim Team, the “Greyhounds”. With an academic grant from the university and a partial scholarship from the Caribbean Utilities Company, he will intern in the Engineering Department during the summer.

Recognized as an outstanding swimmer, Jonathan has been a member of the Stingray Swim Club since 2009. He is a member of the national swim team and has represented his country in CARIFTA since he was 12 years old. Jonathan had the honor of leading the CARIFTA delegation as flag bearer and co-team captain (2015). That same year, he participated in the Island Games in Jersey, Channel Islands and again in Gotland, Sweden (2017). In Gotland, he was again flag bearer for Cayman. He participated in the Commonwealth Youth Games in the Bahamas (2017). As a member of the CARIFTA 4×200 men’s relay team, Jonathan has won bronze (2015) and silver medals (2016 and 2017). He achieved a bronze medal as part of the relay team at Island Games (2015).

His love of swimming has taken him to regional meets and an International Swimming Federation (FINA) training camp in Doha, Qatar (2014). These competitions have given him the chance to meet other athletes and promote his country as an unofficial sports ambassador.

Despite his substantial swim schedule of 20 hours a week, Jonathan was an honour’s student at Triple C and on his school’s Citizenship Honour Roll for four consecutive years. On graduation, Jonathan earned an Excellence Award in Sports and The Dart Award of Excellence in Science, Technology, Engineering & Math (STEM).

Jonathan is a past vice president of the Key Club. He has been actively involved with the service club since the 9th grade. A volunteer for the primary aged reading programme at the Kiwanis mobile library, Jonathan also took part in fundraisers for other Key Club initiatives. He assisted annually in the Key Leader’s weekend retreat for developing leadership and teamwork skills and the Santa’s Landing for families, the Buy-a-Kid Breakfast programme and the Kiwanis Bike-a-Thon.

Throughout his junior and senior school years, Jonathan served as assistant coach in the after-school swim programme. It was through this programme that he was able to share his passion for the sport and was able to give new swimmers increased confidence and proficiency in the water. An enthusiastic instructor, motivator and team builder, who garnered the respect of his peers, Jonathan was awarded the Save Our Youth (SOY) Award for Outstanding Community Service (2017).

British man swims around Grand Cayman for charity
The significance of Discovery Day in the Cayman Islands
Flags flown at half-mast in honor of AJ Miller
TCHT: Jean wants a house!
Share your vote!

No, thanks.
How do you feel after reading this?
Tags: UCCI

Hanging on the Brac?