Her Majesty’s Cayman Islands Prison Service (HMCIPS) leaders and juvenile inmates are currently working together to construct a basketball court on the prison grounds.

Prison Director Neil Lavis said the juveniles recently asked for a basketball court because they did not have one in their exercise yard.

“Although exercise is mandatory and built into their daily routine, specific sporting equipment and facilities are not a necessity,” Mr. Lavis remarked. “So, prison management agreed to fund the building material for the basketball court, not only because it would be a great way for the young men to occupy their time, and focus on fitness, but it would also create an opportunity for them to learn some valuable skills.”

The teens were eager to commence the project immediately, and prison officers took the initial steps by researching how to properly construct a basketball court.

Once the perimeter was laid out, everyone pitched in to frame the area, with the officers closely supervising the cutting and nailing of the wood framing. The teens also got some hands-on experience digging a 3-foot hole with a jackhammer to anchor the basketball hoop.

“All of the teens got involved and put in the sweat, muscle and time to dig out the area for the court,” the prison director explained. 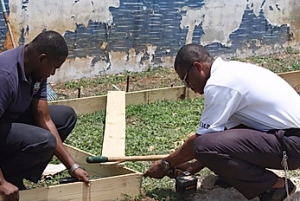 This week the group began laying the foundation by pouring the cement. The next steps include preparing the court area with rebar and installing a pole for the basketball hoop.

Deputy Director of Rehabilitation Aduke Joseph Caesar said the officers have taken the opportunity to not only teach the young men basic construction skills but also to have conversations with them, listen to them and encourage them.

“This is exactly the kind of project that makes rehabilitation possible,” she stated. “All these young men know is that they are working on a basketball court, but the benefits to them can’t be measured in time or 3-point shots. They are developing positive relationships with adults, learning to work with each other, learning about delayed gratification and possible training and employment options for future careers.”

Director Lavis said while incarcerating children is absolutely the least desirable option for any judicial system or society; it is often a reality.

“Everything beyond the basic needs such as food, shelter, safety, education is an earned privilege in prison,” he explained. “Granting the teens the request for a basketball court has already provided mentoring opportunities and shown them the power of teamwork.” 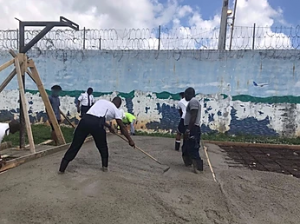 Currently, HMP Northward houses four young men under the age of 18 in a unit where every effort is made to keep them separate from the adult prisoners, as is the legal requirement per the Constitution. The Children’s Unit includes separate living quarters, association areas, a classroom, and an exercise area.