(CMR) In its latest release this year, the Cayman Islands Postal Service  (CIPS) celebrates a special stamp issue in honor of a senior citizen who was a beloved and long-lived icon of the local community.

At a remarkable 106 years old, the late Mr. Wellesley Howell was a well-known musician, notably a saxophonist, who also ran a shoe-making and repair shop of long-standing repute in George Town. He was the well-loved father of Cayman Islands’ Supervisor of Elections and Chief Officer in the Ministry of Border Control and Labour, Mr. Wesley Howell, and Deputy Chief Officer in the Ministry of Education, Ms. Lyneth Monteith.

Mr. Howell Snr. was born in Jamaica on 7 January 1915, one year into World War I, and was the longest known surviving person in the Cayman Islands at the time of his passing on 22 July 2021.

The stamp issue was requested by members of The Cabinet in tribute to Mr. Howell Snr.’s years, accomplishments, values and life, both in Jamaica and in the Cayman Islands, to which he moved in 1958.

The stamp issue includes a set of two stamps in denominations of 25 cents and $2 and a First Day Cover (FDC) for collectors. The images depict Mr. Howell’s prowess as a shoemaker standing in the doorway of his well-known shop on Shedden Road and as a musician, playing his saxophone solo and also in a group on the FDC. 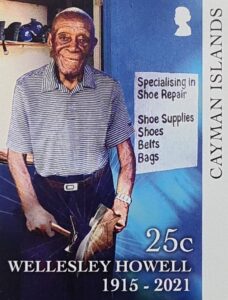 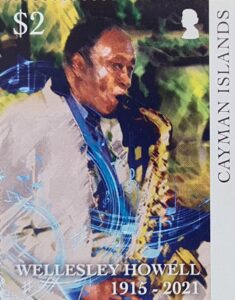 The stamps went out for sale on Thursday, 21 April 2022, and the FDCs will go on sale as soon as they arrive on island, Philatelic Bureau Acting Manager Mrs. Shindi Beput outlined.

Commenting on the latest stamp issue, the Postmaster General, Ms. Sheena Glasgow acknowledged the Cabinet’s wish to celebrate this iconic member of the Cayman Islands community and commemorate him in this stamp issue. She said:

“What is truly inspiring were his enduring humility, joy for living, love for God and his family and his enthusiasm for staying active, including in the community, right until his passing – without allowing the progressing years to slow or limit him in these areas.”

Ms. Glasgow continued, “Equally motivating was his passion for maintaining high standards and ethics in all the work he did and the fact that he trained many Caymanians in the shoe repair trade. Through his long and abiding love for dominoes, which he even played competitively by representing the Cayman Islands in overseas tournaments, Mr. Howell Snr. also displayed another high point of his personality.”

She concluded, “We thank the members of his family for sharing photos and details of his life which helps us depict Mr. Howell in the stamp issue and I encourage customers, especially collectors, to avail of this opportunity to obtain a bit of local history.”