(CMR) Cayman Marl Road understands that a total of six containers went overboard yesterday morning. Three full containers with goods remain at the bottom of the ocean after a mild nor'wester hit the area. The containers made their way overboard after crashing waves hit the facility yesterday morning around 9:00 am. There has been a call from many for port management to be held accountable for the loss of goods and what critics claim was a preventable incident.

Initially, persons thought there were only three empty containers on the loose. However, well-placed sources have indicated that there are three others unaccounted for that appear to have sunk to the bottom of the ocean. Rescue efforts would begin as soon as reasonable depending on the weather.

There has been significant blaming of various persons for this fiasco including the acting port director, Joseph Wood and the political arm of government. In addition, a number of persons in the community are erroneously blaming Alden McLaughlin and his unity government for this mishap claiming that this was done to make the argument that the port enhancement is needed. In fact, some talk show and social media contributors were on making the point that the entire fiasco appears to be a well-orchestrated plot to make a point.

Talk show host and former board member of the Port Authority, Woody DaCosta said it was “poor management and poor logistics” that allowed this to occur. He believes that management should be held solely responsible for this predicament.

“I'm willing to take sides on this. Clement just knew what he was doing, he was on the job for twenty years and I had the privilege of looking at his presentation as chairman of the sub-committee that assessed the new PD, that hired him. I've never heard of us losing a container.”

DaCosta has called out the government and said that he was previously proport but now has been turned because of the methods being used by the political arm to achieve their goals.

Wood contacted DaCosta via WhatsApp messaging indicating that he wanted to share the facts with him because he feared there would be a significant amount of calls on the matter. He shared that there were some un-forecasted waves yesterday from a front that was forecasted to stall before reaching the Cayman Islands. Further explaining what transpired he said:

“Normally we stack containers along the west wall of the dock so that we have enough to load the cargo ships when they arrive and still have space for transportation operators servicing the cruise industry. We have to use the cargo dock for cargo at night and cruise during the day. However, the cargo ship on Wednesday night arrived late at 1:25 am and commenced discharge at 2:00 am but they left at 6:00 am without taking any empty containers. The supervisor on duty said the sea was calm when he left at 6:00am, that is support by our CCTV. The weather forecast said it only predicted 2-4 foot sea heights on Thursday. The dock is 8 ft. above sea level. Sometime after 9:00 am large swells arrived and started harming containers that were on the west wall.”

Cargo staff left the site and the swells pulled containers into the ocean that were stacked four high. The lengthy explanation continued but was not distributed to other local media houses. DaCosta called this whole explanation “spin” and states that the operational procedure was not followed. He was a port authority director for almost four years and at times served as chairman of the board. 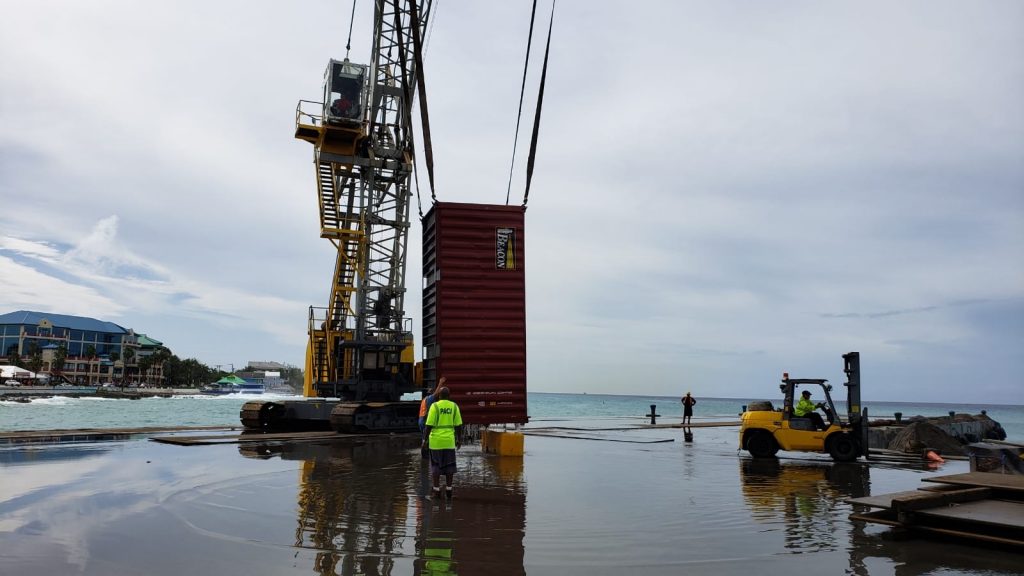 CPR Cayman member Mario Rankin also called into the program and shared his concerns about the situation. He directed his comments squarely to the management of the Port Authority and essentially called the director incompetent stating he should have removed the container knowing that inclement weather was forecasted:

“if that's the best he can do in terms of explanation … we do these things have never taken place in the past because we had well-seasoned persons who were running the port regardless of whatever other issues they have. We know that when bad weather is forecasted you take no chances, you take all of those containers out of harm's way, so therefore you are being proactive instead of reactive. The reality is that we have three containers at the bottom of Hog Sty Bay and three that were floating around. What we have to come to the realization of is that look the port authority is in dire need of leadership – that is obvious at this particular point.”

Rankin explained that six containers was not the end of the world but he had concerns about other things he was hearing including an injury that “never made the press.”

Others were not persuaded by Wood's explanation and are convinced that this was a plan to sway others to support a port enhancement agenda being pushed by the government. Despite this, some said they were tired fo the politics with the port and reminded the public that there's no conspiracy theory afoot as there was a similar situation on December 23, 1989. One seasoned Caymanian noted:

“We have very short memories, just because youngsters don't recall something doesn't mean that it didn't happen. Containers went overboard right before Chrismas in 1989.”

It appears that at least one blue container was retrieved from the bottom of the ocean earlier this afternoon as eyewitnesses sent us exclusive footage of the shredded container being lifted out of the ocean.

No, thanks.
How do you feel after reading this?
Tags: Cayman Islands Port AuthorityJoseph Woods

(CMR) Parents have reportedly been turning to social media like Facebook Marketplace to source formula for their babies as a...

(CMR) The price of the Terra (LUNA) cryptocurrency reportedly collapsed to nearly $0 earlier this week, wiping out the fortunes...

(CMR) The Board of Directors of Caribbean Utilities Company, Ltd. (CUC) has appointed Mrs. Sheree L. Ebanks as its new...

(CMR) Golfers from across Cayman recently hit the greens to drive in $20,000 for charity at the inaugural Logic Golf...

(CMR) The credit and debit card information of Aeropost customers across the Caribbean and Latin America was compromised following a...

Dentist sues dance hall doll for over $70,000 in outstanding loans