Xavier “Dag” Samuels, a veteran track coach in the British Virgin Islands who most recently worked with Kyron McMaster, reportedly died as Hurricane Irma moved through the territory.

The athletic community in the Caribbean is mourning the sudden and untimely passing of athletics coach Xavier ‘Dag” Samuels, who passed away on Wednesday. He was one of the reported ten lives that were lost during the passage of hurricane Irma through the Eastern Caribbean on Wednesday. Apparently he fell from the roof of his house in BVI.

“Several people in my community today were expressing condolences, so yes, I can confirm,” he said, before noting additional details were unavailable due to destruction from the storm. “In my area cell towers have fallen down so you can't get communication.”

“Dag was an IAAF Level 5 Chief Coach and a close friend of track and field in St.Kitts-Nevis. He was also the coach of international hurdling sensation Kyron McMaster of the BVI,” the statement read. “We will forever miss him. His work is an inspiration and will continue through those he has touched. Our love and sympathies are with the family and friends of veteran coach Xavier ‘Dag' Samuels.”

McMaster, a 20-year-old rising star in the 400-meter hurdles, used Samuels' guidance to qualify for the 2017 World Championships at Olympic Stadium in London last month. He was disqualified during the preliminary heats due to lane infringement, however. 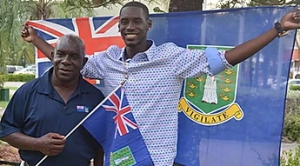