UPDATE:  Police have received information that both Jemma Watson, and Jasmine Presida, of Bodden Town, may have been seen in West Bay and in the vicinity of Palm Dale Avenue, George Town. They are believed to be traveling together. 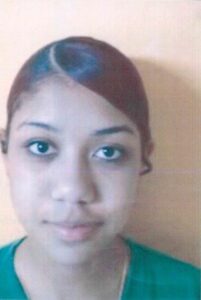 Police continue to seek public assistance in locating both girls, and in light of the fact that they have not been located in almost 72 hours, have provided a  photo of Jasmine.

Officers continue to encourage Jemma and Jasmine to return home or attend the nearest police station immediately. Anyone with information on their whereabouts is encouraged to call the Bodden Town Police Station at 947-2220 or the M.A.S.H Unit at 649-6000.

(CMR) 48 hours after two teens went missing from the government operated Francis Bodden Children's Home they have been reported missing by the RCIPS. The policy of waiting days to ask for the public's assistance in locating missing teens has been criticized as being archaic and non-responsive.

Jemma Watson, age 15, and Jasmine Presida, age 13, both of Bodden Town, have been reported missing, and police are seeking the public assistance in locating them. Both girls left a facility shortly before 8:00PM on Saturday, 2 April, and have not returned back since.

Jemma is described as about 5’7” tall, of brown complexion, with brown eyes and short black hair. She was last seen wearing a floral night dress, grey tights, and grey and black hoodie and black socks.

Jasmin is described as about 5’0” tall, of slim build and brown complexion, with brown eyes and black hair. She was last seen wearing black tights, a black jacket with red and white stripes on the sleeves and no shoes.

Officers are encouraging Jemma and Jasmine to return home or attend the nearest police station immediately. Anyone with information on her whereabouts is encouraged to call the Bodden Town Police Station at 947-2220 or the M.A.S.H Unit at 649-6000.

Anonymous tips can be provided directly to the RCIPS via the Confidential Tip Line at 949-7777, or via the police website.

No, thanks.
How do you feel after reading this?
Tags: Francis Bodden Children's HomeJasmine PresidaJemma WatsonMissing Children

(CMR) A stolen vehicle has been reported to officers at the West Bay Police Station after it was stolen in the...

(CMR) The RCIPS is reminding all members of the public that if you are going to drink, don’t drive. Make...

Concerns as youths engage in anti-social behavior at Camana Bay

(CMR) The police have confirmed Friday evening's major incident and attempted apprehension of several suspects in the West Bay Road...