by Renae Stampp
in Police
0

(CMR) The police have released a portion of CCTV footage of a burglary that took place on Thursday morning with the hope of getting the public's help to identify the perpetrators. Chicken Chicken in West Shore Centre was broken into.

Police reports are that shortly before 6 am on Thursday, 26 August, officers responded to a report of a burglary at the restaurant on West Bay Road. The culprits appear to have broken in through the front entrance after 4:30 that morning and made off with a safe containing cash. The matter is currently under investigation. 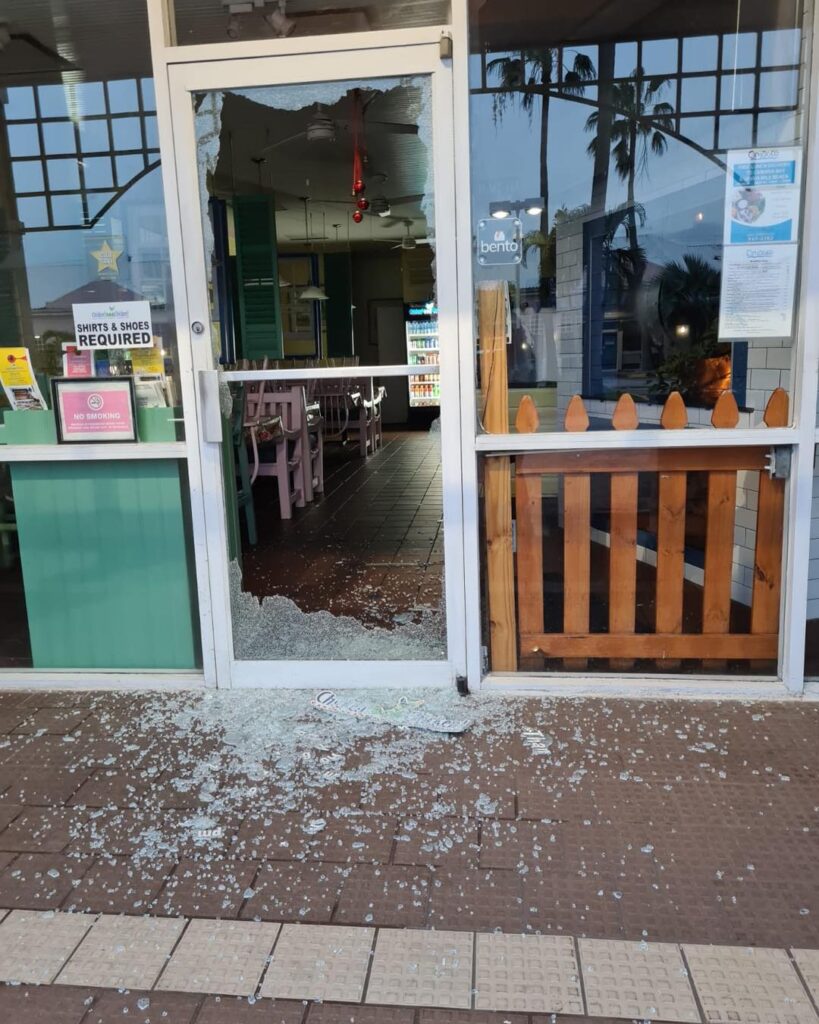 The suspects are described as being tall and slim, wearing dark clothing, including long-sleeved shirts, and were masked and wearing gloves.

Later that morning, officers were alerted to a report of another burglary at a business in Cayman Falls Plaza on West Bay Road. The culprits appear to have broken into the business shortly after 4:00 the same morning and made off with a safe.

The description of these suspects is similar to that of the suspects in the burglary at West Shore Centre, and both burglaries are believed to have been committed by the same persons.

Police have retrieved CCTV footage from the West Shore Centre burglary location and are releasing a portion of the footage in hopes that members of the public may be able to assist with any information about these men or their activities, which could identify them or help locate these safes.

Anyone with information on either of these incidents is asked to contact George Town CID at 949-4222. Anonymous tips can be provided directly to the RCIPS via their Confidential Tip Line at 949-7777 or via their website.

Police have previously noted an uptick in commercial burglaries during the month of August. The public is being reminded to take preventative measures with their businesses to avoid loss and damage and assist in the investigative process if such incidents do occur.

“We commend these businesses for having security measures such as CCTV cameras installed, which have already assisted in our investigation,” Superintendent Peter Lansdown said. “We encourage other businesses to increase security if possible by engaging security company services, installing alarm and camera systems, and ensuring that the systems are maintained and kept up to date.”

To find out more about what can be done to protect your business, visit the below link. https://www.rcips.ky/crime-prevention.

No, thanks.
How do you feel after reading this?
Tags: Robberies

Police urge drivers to be careful on roads

(CMR) In light of recent fatal traffic collisions and other serious traffic incidents, the RCIPS is appealing to drivers to...

(CMR) A licensed Remington shotgun and three cartridge cases that were stolen from a residence on North Side last month...

(CMR) The police say they are carrying out a full investigation into the tragic death of the two-year-old child who...

(CMR) Three persons, including two women, were arrested on Friday after police found a gun at a residence in the...

(CMR) An RCIPS police constable was killed over the weekend while vacationing in Honduras with his family. The officer has...

Increase in thefts from motor vehicles