(CMR) Over the past two days, the closure of Poindexter Rd. in Prospect has caused outrage on social media among some morning commuters.

Cayman Marl Road has received numerous complaints that the police have decided to close off a public road without due process. Yesterday morning the RCIPS had 1 officer posted at the road and was diverting traffic and apparently today there were up to 4 police cars there.

After some investigation, we have now been able to confirm that the closure was requested by the Premier The Honourable Alden McLaughlin (Red Bay) and MLA Austin Harris (Prospect). When contacted Harris explained why it was necessary to implement this change:

East-West arterial Road users have been using Poindexter Road to bypass traffic in the morning and so doing have created difficulties with further traffic delays for residents of Prospect and Red Bay. As such, it was requested that the police restrict traffic Monday – Friday on Poindexter Road between 7a-9am. Only residents of Prospect and Red Bay will be allowed access during this time, during weekday mornings.

Poindexter Road sits on the electoral border of both Red Bay and Prospect and so this collaborative effort between the two representatives who have indicated it equally impacts residents in both districts.

From all accounts, persons use that road to attempt to work around the morning traffic coming from the Eastern districts. A Facebook poster vented:

So someone please tell me when it became illegal to turn onto Poindexter Road in the morning. Yesterday one police car and today two. So what happens to parents with children going to Prospect Primary school? Do they have to stop and prove themselves??

Perhaps they are best policing the school zones where cars are speeding through when they should be going 15mph, the zone by Clifton Hunter High School is a prime example, lots of revenue to be collected in speeding fines there when that flashing light is on in the mornings!

Another posted messaged CMR and said

My question for today is why police are preventing people on spotts from turning right onto Poindexter Rd to prospect primary. 4 police cars at that junction is overkill!

Another social media posted supported the move and shared her experience:

Actually they have allowed parents with PPS (Prospect Primary School) uniform on to go through.

For the past two mornings this has freed up the congestion of parents getting their kids to the school. It has worked tremendously also flowing the traffic via the bypass thru prospect to connect back to the main road. There were mornings when I sat in the traffic on the bypass for 20 mins just trying to get to PPS or one morning 17 mins to cross over on Poindexter to get to PPS.

CMR has reached out to the RCIPS and awaits a response from them.

Cayman Marl Road sources indicated that the Commissioner of Police visited the site this morning with a view to making the closure a permanent one.

From a group chat, we can see multiple persons in the Premierâ€™s WhatsApp chat group were in full support of the closure. 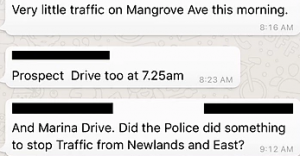 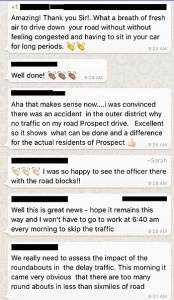 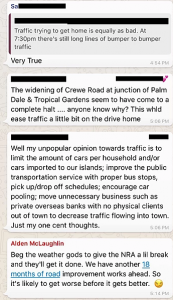 Alexander Hotel - Cayman Brac - Has it been sold?