(CMR) The Cayman Islands Monetary Authority has imposed discretionary administrative fines totally $250,000 on Seven Mile Securities pursuant to the provisions of sections 42A and 42B of the Monetary Authority Act. Penny stock fraudster Andrew McAlpine (47) used this broker to commit fraud. He pleaded guilty on April 22 to securities fraud in the United States after entering a change of plea to a $6.6 million pump and dump scheme.

The fines are a result of the company's failure to comply with the legislative requirements: 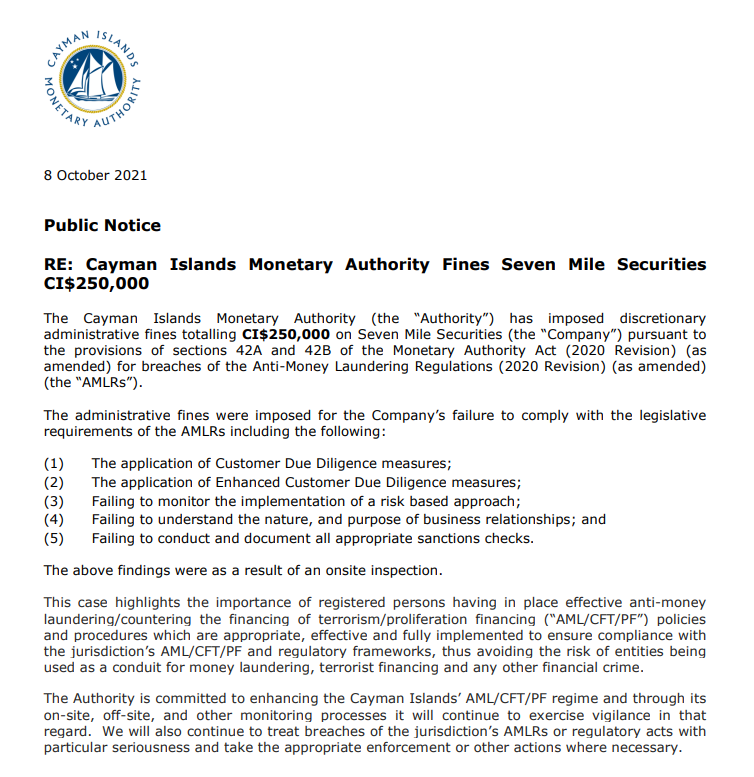 The Canadian citizen pleaded guilty to one count of conspiracy to commit securities fraud at a federal court in San Diego, California. It was alleged that he  “maintained an offshore brokerage account in the name of Dunstaffnage Corporation with Seven Mile Securities in the Cayman Islands”

CMR first reported McAlpine's arrest back in Orlando, Florida on September 18, 2020, when he boarded a chartered flight to Canada. Many were quick to come to his defense including the organizer of the charter flight who had also attended church services with McAlpine. His wife also reached out to CMR to share that she was blessed with so many people in the community showing her an outpouring of support during her time of need.

Conditions of his guilty plea are that he will be sentenced in mid-January 2022 where he is expected to go to jail. He will also be paying restitution of at least $270,689.

No, thanks.
How do you feel after reading this?
Tags: Andrew McAlpine

(CMR) 32-year-old Jovin Omar Fuentes (Berry) was gunned down on Friday evening shortly before 5:30 pm in a rental car by...