The Opposition/Shadow Government spent the weekend analyzing the government's budget preparing for the upcoming budget debate which begins on Wednesday, November 1st.

They issued the following statement:

The Opposition intends to support those things in the budget that we believe as, “ The Peoples’ Representatives”, are good for Caymanians and offer constructive alternatives that offer not “EMPATHY” but “ACTION” for Caymanians.

We have chosen as our theme across our five contributions to this debate;

“BUILDING A BETTER FUTURE BY LEARNING FROM OUR PAST THROUGH A RETURN TO OUR FOUNDING PRINCIPLES”.

It was Mahatma Gandhi who wrote about the seven dangers of Human Virtue:

It was the latter of each of these traits that built Cayman and we, in particular, the Government and specifically us the elected members of this honorable house need to return to encouraging, demanding and demonstrating WORK, CONSCIENCE, CHARACTER, ETHICS, HUMANITY, SACRIFICE AND PRINCIPLES while combining all these with Good Old fashioned Caymanian Common Sense, Ingenuity, and Entrepreneurship. 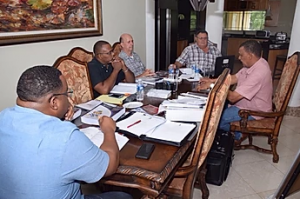 We intend to make constructive alternative uses of the resources projected to be collected by the Government, that is the $730.7 and $722.8 million as stated in the budget documents. For example, when we suggest that resources should be increased in a particular area like Education we will recommend equal reductions in other areas.