The World of Pageants – A Reality Check! 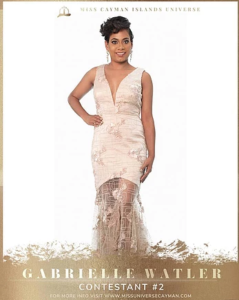 (CMR) Garielle Watler, contestant #2 is not the typical Miss Cayman contestant! So much so that she got us to thinking about the qualities required for pageantry and why she stands out among the other young ladies currently running.

Pageants by their very nature are deceptive – they portray a focus on outward beauty that many argue is only skin deep. Waist sizes, long legs and the ability to make judges believe you have the aura of a queen is what is often highlighted.

I have had the experience of attending a Miss Universe pageant and when you strip away the makeup, implants, gorgeous gowns and sashes you've often left with very plain looking girls. In fact, the sort of girls that make you realize how incredibly deceptive the world of pageantry really is. I've seen tattoos and horrible back acne being covered up. Once on stage you'd never know that those flaws existed.

The truth is often much deeper and requires us to go far beyond what is presented to us at face value.

In a story posted yesterday, Cayman Marl Road highlighted the fact that the eligibility of some of the girls was called into question. That is a fact – that others had raised the questions; which CMR posted. However, given the competitive nature of pageants we are also well aware of the fact that many will seek to highlight and eliminate the competition by any means possible. Pageants can be extremely “mean-girl” in nature – competitiveness at it's best and worst depending on the girls involved.

The harrowing details of Tiffany Conolly's situation was shared several days ago. A year long situation that has really called into question her attitude and ability to resolve matters professionally and in a timely fashion. Those facts are no disputed and have been documented as part of the court records. What readers may not know is that others have come forward sharing their interactions with Conolly that likewise questioned about maturity and ability to handle conflict without degradation.

Gabrille Watler – A Cinderella in the Making?

Many of us are all to familiar with the childhood story of Cinderella and her wicked step-mother and sisters. She endured pain and abuse at the hands of people who were supposed to love and protect her. Sadly, an all too common story even here in Cayman.

This brings us to Contestant #2 – there is much more to the story of Gabrielle Watler than meets the eye; and the previous drug offenses against her seen on the court list do not tell the full story. Her story is a complex one with pain and hurt much like Cinderella – except this is no fairy tale. Real life hurt leads to people attempting to cope. It's difficult because CMR is now much more cognizant of the intimate details of her life and her struggles.

Gabrielle has had challenges beyond what most of the other pageant girls would have had to endure. Without detailing those challenges explicitly because of the personal nature suffice to say they would be enough to make most people crack. Some people cope with such tragedies with substance abuse, hurting others, self-harming or worse. Gabrielle turned to ganja – certainly not the worse of choices. Despite that, her choices had consequences and she has accepted those fully.

In fact, she has successfully completed her drug court program and was commended by Magistrate Foldats just this week for her remarkable progress. She has no recorded convictions and presented this to the committee. Most people have advocated for the decriminalization of personal ganja usage.

She maintains a good job and decided to take a chance at entering the Miss Cayman pageant – a lifelong dream. This pageant may actually mean more to her than many others who have entered. Undoubtedly this is not something she could have seen for herself several years ago. This now is a personal goal and just making it to the stage on Saturday night will be a huge accomplishment for her.

Actions have consequences but mistakes can motivate you!

As with most dreams she saw that it could be impacted by her previous decisions and make a remarkable choice – to approach the Miss Cayman committee on her own accord and advise them of her previous drug use and personal challenges. She explained her successes since those mistakes and was open to be subjected to a drug test at any time.

This story is in huge contrast to the irresponsibility of many other pageant girls both past and present who lie and blame others for poor decisions. Gabrielle has been drug free and by all accounts has taken a tragic situation and made it into a stepping stone for personal growth and achievements. This isn't just a pageant for her – its a sign that despite your mistakes there is always hope and hard work can be rewarded.

This isn't easy in a small place like Cayman where people will judge you without knowing all the facts. Truthfully, what better role model could we ask for? Coming from a challenging background and enduring personal pain and still turning your life around is a testament that many of our young people need to see for themselves. No doubt the pageant has already offered an experience she can continue to build upon including etiquette training and toastmasters classes.

This is far different than having a privileged upbringing with everything handed to you on a silver platter and achieving successes after that. Imagine a Kylie Jenner vs. Oprah Winfrey!

The latter is self made and had the admiration of many for working hard and overcoming abuse and many other seemingly insurmountable obstacles. Kylie is about to be a billionaire and whilst she may have put in a lot of work as someone said she stared at “3rd base” – with the right parents, contacts and money given to her. So hitting a home run isn't quite as shocking nor admirable.

They are both successful in their own right; but the stories and how they got there are extremely different. One automatically garnishes more respect because success was almost impossible.

Young people will make mistakes – we all have! The major difference is in how those mistakes are handled and whether or not they are used to break us or make us. Gabrielle has used her to make her a better person and pageantry worthy. She has many qualities required of a Miss Cayman and could no doubt become a wonderful motivational speaker for many young girls in these islands.

Not to be taken lightly Gabrielle has had the aide of many around her including personal mentor, Jean Solomon, who came to her defense on social media after yesterday's article.

We wish all of the girls a successful pageant night – but there can only be one winner crowned. Despite, our message to Garbrille Watler is you are already a winner – keep shooting for the stars!

Caymanian passes away in Honduras