Mother takes to Facebook to warn about underage groomers

(CMR) A mother, Mary Jackson, is taking drastic steps to warn others about a taxi driver she claims made attempts to lure her underage 14-year-old son with drugs, money and verbal advances.

In August, the mother contacted Cayman Marl Road and shared that she had concerns after her son; whom she describes as “introverted” divulged that he had been approached by a man on the road and given a bottle of wine. That man was later identified by the mother as Richard N. Ebanks (“Richi Rich”). She claims he also invited the young man, who does not know him personally, to come by his house and “hang out” there with him. He also gave him his business card to contact him.

Apparently her son rides his bicycle to and from work and often sees the man en route or at the gas station where the child is employed part-time. She has stated that she has instructed her son to have no further communication with him whatsoever. Last Christmas, it is alleged that he had given the child $25 as a “Christmas present” while he waited outside a local grocery store. Red flags were raised once she pressed her son for more details after he opened up to her that the man was making him feel uncomfortable. The child shared that he also made attempts to offer him ganja by inquiring if he “smoked.”

Jackson feels that Ebanks is attempting to groom her son and worries about the safety of other children in the area.

Jackson contacted a Sergeant Hill at Royal Cayman Islands Police Station West Bay location. However, she states that she was less than impressed with the response from him. Ebanks was called in and warned to have no further contact with the child or he would be arrested. Jackson indicated she would have thought that giving minor alcohol and offering drugs was an arrest-able offense. Another officer privately confirmed to her they had concerns about this man as his own son had also been approached by him. He seemed surprised that “he was at it again.” 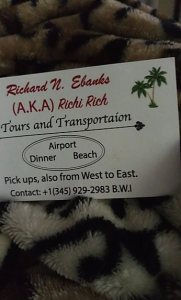 Jackson did not stop there and also contacted Ebanks directly and strongly warned him against any further contact with her son. She further went to the Public Transport office and reported him to them. She was informed by that office that he has no taxi license but appears to drive a taxi for a relative who holds the license. However, this may not be permissible under their rules and is likely an arrest-able offense.

When asked why she decided to publicly shame this man, Jackson explains that she feels more needs to be done by the politicians. She also feels strongly that parents also need to be aware of the lingering danger. She was also concerned that despite reporting him to the police and Public Transport Office; he was recently seen at the port attempting to pick up passengers.

“We have a serious problem that isn't getting better; it just gets worse here's an example of him attempting to groom my son and others. Where's the legislation to protect children from this? Where's the legislation to protect children from being given drugs and alcohol by adults? Politicians need to make sure that the laws are amended to include all of these grooming techniques.

As parents we have to do everything in our power to now protect our children and expose these perverts who work hard to harm them. I hope some good will come out of this.”

In August, the government voted on a bill to address changes to the Penal Code that would create eight new offenses for sex offenders who target children. Most of those offenses relate to the use of technology to contact children. However, there does not appear to be anything in the legislation that would address this type of situation.

Jackson is hopeful that will soon change and has tagged Newlands MLA Alva Suckoo in her public social media post.

Grooming is when someone builds an emotional connection with a child to gain their trust for the purposes of sexual abuse, sexual exploitation or trafficking.

Children and young people can be groomed online or face-to-face, by a stranger or by someone they know – for example, a family member, friend or professional.

Groomers may be male or female. They could be at any age.

Many children and young people don't understand that they have been groomed or that what has happened is abuse. 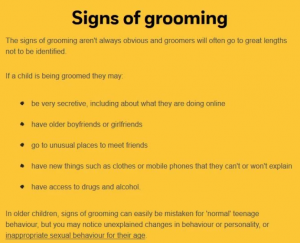