(CMR) While on a missionary trip to Florida with 17 other boys from his church, Michael Dumas decided to hit Pompano Beach for a day of relaxation on June 18. But as Michael and his friends would soon discover, their day at the beach would soon haunt them for weeks.

Soon after 17-year-old Michael returned home to Memphis, Tennessee, he developed a painful earache that was followed by the appearance of rashes on his feet. When red bumps developed on other areas of his body, Michael’s mother, Kelli Mulhollen Dumas, took him to the family pediatrician. That’s when they made a startling discovery: Michael was infected by hookworms.

“I’m a dentist, and I have a degree in biology — I have dissected things. Science is my gig,” Kelli told PEOPLE.

“But hearing your son has parasitic worms inside of his body and that they’re replicating and growing? As a mother, my stomach tightened up into a big tight ball and started flipping around. I thought I was going to throw up.” 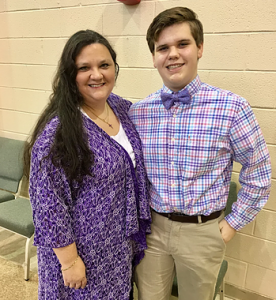 Horrifyingly enough — among the multiple hookworms that were found buried beneath Michael’s skin — doctors found one that measured three-inches in length.

Since returning home, Michael has been in pain and visited a pediatrician four times, as well as a dermatologist. He has been prescribed Clindamyacin, Ivermectin, a steroid dose pack and Albenza.

Dumas says she posted to social media to warn others about allowing children to be buried in the sand.

In the post, Dumas claims she contacted a health department in Pompano Beach and was told, “Everyone knows to wear shoes on the beach because you can get parasites.”

However, Pompano Beach spokesperson Sandra King told the media, “We haven’t heard from anyone, not any resident, not the health department.”

Hookworms are parasites that are typically spread to other humans through the fecal matter of an infected person, according to the Centers for Disease Control. If the contaminated feces are left on the ground after someone defecates, hookworm larvae can then penetrate the skin of those who come in contact with it, such as when someone walks across the ground with their bare feet.

Recalling the trip to the beach, Michael told his mother that at one point he was buried in the sand by his friends, and it is there that Kelli believes her son was infected by the parasites. 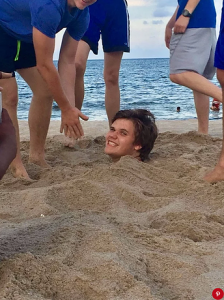 Since then, five other members of the missionary team who visited Pompano Beach have tested positive for hookworms, Kelli says.

According to the CDC, severe hookworm infections can cause abdominal pain, diarrhea, loss of appetite, weight loss, fatigue and anemia. If a young child is infected, their physical and cognitive growth can also be affected. The agency recommends that people refrain from walking barefoot in areas where there could be possible fecal contamination.

“My son is going to have permanent scars from this. He has a gaping wound on his right foot. He has four sutures. This is not a joke,” she says. “This is beyond any scope, I never dreamed this is something that would happen.”

That’s it! That’s all it takes. Hookworms are considered a “neglected tropical disease” because it’s generally pretty easy to prevent, but still such a big problem for many people. A little knowledge and a minor attempt at prevention goes a long ways.