(CMR) Miss Cayman Universe has been receiving unsanctioned lessons from the former Miss Jamaica Universe, Davina Bennett, who was today featured in a Department of Environment (DOE) Instagram post. The controversial Bennett has admitted in an Instagram live stream of her own that she faced significant criticism for the decision to offer her consulting services in the Cayman Islands. As it turns out Bennett was actually not requested in a formal capacity.

Bennet spoke at large about mostly Jamaicans being “bad minded” and informing pageant officials in Cayman of negative things about her. What was not made clear was the fact that the local pageant committee was actually not responsible for her being on the island and had not approved this training session at all.

Exclusive sources indicate that Davina Bennett was on island assisting the current Miss Cayman Universe, 24‑year-old Kadejah Bodden, from Bodden Town prepare for Miss Universe for the past two weeks. CMR can now confirm that these training sessions were private and have not been approved by the Miss Cayman committee or her government sponsor, the Ministry of Tourism.

In an unusual move, Miss Cayman, accepted private training from Bennett who was a Miss Universe 2nd runner-up in 2017 despite formal training sessions by seasoned professional pageant trainer Dianne Brown back in October. Bennett herself has admitted that this is her first time offering training services on her Instagram page: 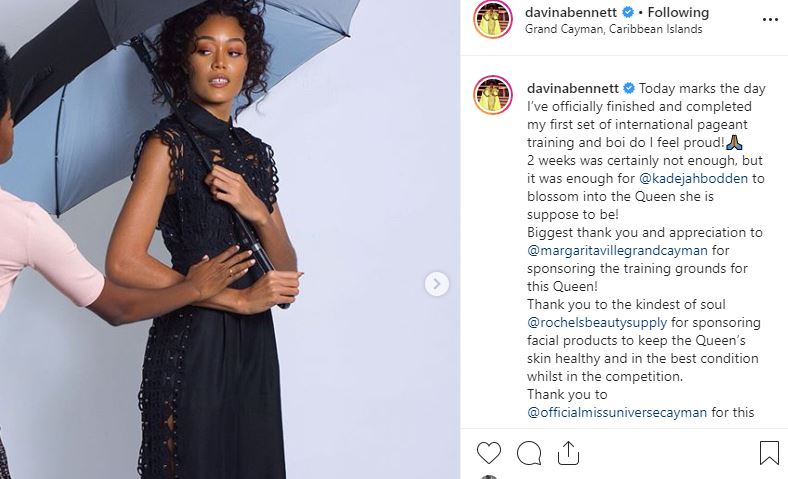 Bennett's live stream did not go into detail about the nature of the comments but she did say that she had received comments herself querying why she was working with another pageant contestant and they had also lodged complaints in Cayman about her. Despite all of that she was determined to not allow “bad minded people” to impact what she as trying to accomplish. 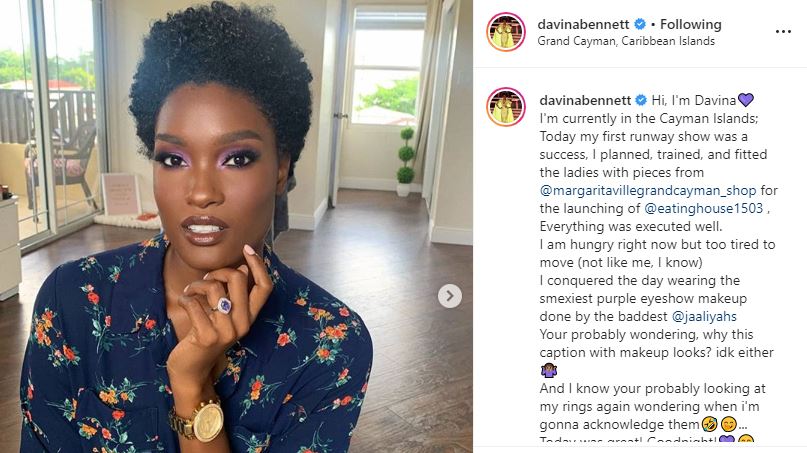 In August of last year spat between Bennett and the Jamaican Miss Universe was ignited when she claimed that in a since-deleted Instagram post: 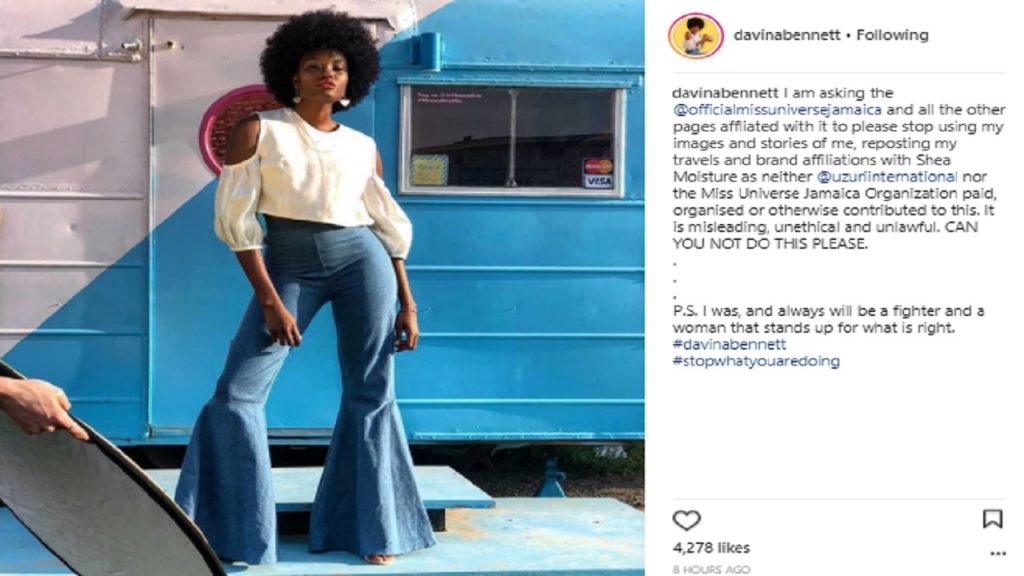 The comment came as a result of an endorsement deal with Shea Moisture. She noted that:

“Neither @uzuriinternational nor the Miss Universe Jamaica Organization paid, organised or otherwise contributed to this. It is misleading, unethical and unlawful,”

CMR has since learned there are additional concerns with Bennett's overall attitude which some have described as “unprofessional and ghetto-esque”. Some viewers of her recent IG live stream from Sunday video agreed with this sentiment that she was less than polished and what they would have expected of a former Miss Jamaica Universe winner.

Apparently, Bennett's husband and business partner is the General Manager at Margaritaville in the Cayman Islands and concerns have been levied against him and fraud charges stemming from a case in Jamaica that has now been resolved. Margaritaville sponsored Bennett's trip to Cayman where she also hosted a fashion show and provided the training. They provided the training grounds: giving access to the gym, beach, hotel grounds and their conference room for training.

Kosvogiannis is a hotel manager and worked at the Melia Braco as GM before quitting in the summer of 2018.

Dimitrios Kosvogiannis was freed in February of this year when the prosecutors in the Kingston and St Andrew Parish Court offered no evidence against him on several counts of obtaining money by false pretense. The police had reported that Kosvogiannis’ arrest last year July emanated from an intense investigation into several fraudulent activities involving two major banking institutions. He was accused of acquiring several credit facilities from the institutions using different TRNs and names.

They did not pursue the fraud matter but did have him set for trial in June on breaching the Revenue Administration Act. His lawyer explained that the former hotel manager, who holds Greek and American citizenship, first received a TRN in the surname Cosvogiannis and received another TRN in the name Kosvogiannis. Oddly, Cayman staff know him by Cosvogiannis. He explained that the Greek alphabet has no “C' and that is why his American passport has the name Cosvogiannis, while his Greek passport has the surname Kosvogiannis. He moved to the island in 2000 where he obtained unconditional residence since he was married to a Jamaican citizen at the time. He was later naturalized in 2009.

The court agreed and freed Kosvogiannis in September 2019. Shortly after that, he began working as the general manager at Margaritaville Cayman.

Kosvogianni also owned the Miss Universe Jamaican franchise but no longer does. Further, the controversial couple partnered several years ago to open a modeling agency in Paris called A-Model Management Agency. He is also said to be a lawyer and world traveler having previously worked in Miami in the shipping business.

Their relationship has been controversial from the onset when in 2017 she was accused of taking the then 48-year-old Kosvogiannis from her “friend” Alicia Burke. According to other sites, someone leaked photos of Bennett with her new beau including a naked photo when he was supposed to have been in a relationship with another Jamaican pageant beauty. 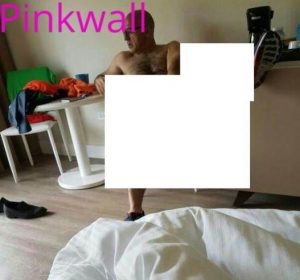 The story was all over the Jamaican gossip news websites. In August 2018 she appears to have confirmed the relationship via an Instagram post. Posters were not kind about the cheating rumors: 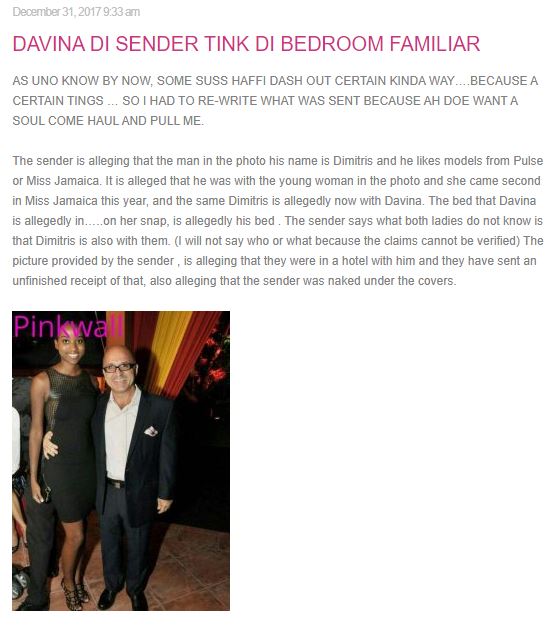 The social media comments were straightforward: 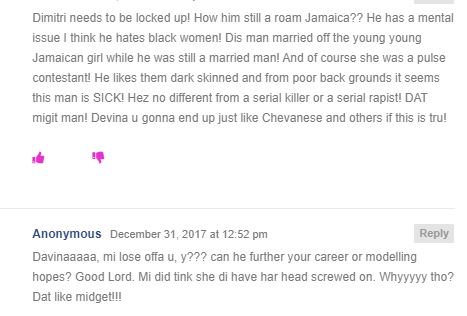 For his part, Kosvogiannis appears to like girls in the pageant world. In 2011 he was engaged to Chavoy Gordon, who had recently placed fifth in the Miss Jamaica World pageant, got engaged last night to Dimitri. At the time he was the general manager of the Grand Palladium Hotel in Hanover, Jamaica. 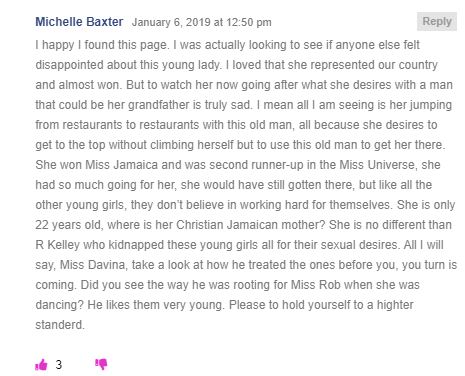 Bennett's Cayman trip had additional controversy after she shared multiple photos of a recent trip to Stingray City where the handling of local stingrays was questioned. For her part, Benett remains unapologetic and shared that the stingrays are loved by boat operators and handled well. Obviously,  she is unaware that their numbers on the decline and their care have been an issue for quite some time. The Department of Environment used the controversy as a teachable moment, reminding others of the importance of our local marine life.

Bennett indicated earlier she would not remove the photos. Whilst in Cayman she was able to meet with the governor and be interviewed by CIG TV. She also could be seen spending time with another controversial pageant beauty, Miss Cayman's second runner-up Tiffany Conolly.

Bennett also provided her services for Miss World Cayman Islands which were fully endorsed by their committee.

Miss Cayman committee chairperson, Derri-Lee Dacres has confirmed that Miss Cayman's official trainer was Dianne Brown. She participated in her ‘Discipline of Beauty’ five-day intensive training programme in late October. This program covered make-up and interview, among other areas of pageantry.

“Dianne is one of the best trainers in the business and we are excited to keep the momentum going for Kadejah before the Miss Universe Pageant. This is a valuable training programme and we would like to express our gratitude, once again, to Dianne for her assistance.”

She also confirmed that there were concerns about Bennett which were brought to the committee's attention and Bodden was advised of those. The decision to engage Bennett's services was a personal one and services were not paid for by the committee.

I am so happy I did this and even more grateful @theyungfusion caught it all on camera! ????????
I thought it was impossible and it wasn’t for me but that was my pride speaking.
I said I don’t want to push myself back into anything that had to do with Pageants because of the experience I had but that was also my experience saying this is risky. “It’s pointless” said reason
“Give it a try but give it your all” whispered the heart. “If you fail to prepare, prepare to fail!” Visit www.votemissuniverse.com to Vote for this beauty and help her make history by placing for the first time for the Cayman Islands.
P.S I will be hosting a viewing party for my Queen @kadejahbodden So stay tuned for all details!
#missuniverse2019 #kadejahbodden #voted #Queentings #teamdejah

No, thanks.
How do you feel after reading this?
Tags: Davina BennettDimitrios KosvogiannisKadejah BoddenMiss Cayman Islands Universe