She proudly modeled her green parrot inspired national costume during the preliminaries of the 66th Miss Universe competition.

Conolly’s national costume showcases the Island’s national bird, the Cayman parrot, which boasts luminous colors particularly high greens and brilliant blue wing feathers which are only apparent when the bird is in flight. 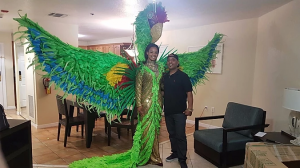 Designer Dexter Seusahai designed her one of a kind national costume

He utilized a unique blend of lace and sequins in a body-hugging gold gown, paired with a galore of feathered embellishments which created wings and a headpiece.

The stunning headpiece, which flowed from the feathers along the gown, showcased the national bird in all its honor, adorned with green jewels, green and red feathers and a glittered filled golden beak which sat perched atop Connolly’s head – the gown was simply stunning and empathized the national pride of the island. 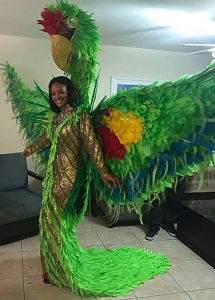 Miss Universe 2017 will be the 66th Miss Universe pageant to be held on 26 November 2017. The event is scheduled to be held at The Axis at Planet Hollywood in Las Vegas, Nevada. Contestants from 93 countries and territories participated in this year's pageant, surpassing the previous record of 89 contestants in 2011 and 2012.

The show will be hosted by Steve Harvey and Ashley Graham. Performers include Fergie and Rachel Platter. Carson Kressley will join runway coach and pageant expert Lu Sierra in the commentary and analysis table during the telecast on Fox.

There was a selfie with Miss Iraq and Miss Israel that has caused some controversy for the pageant. Read more

The six judges for the preliminary competition include:

The six judges for the final telecast include:

No, thanks.
How do you feel after reading this?
Tags: Miss Cayman Islands Universe