(CMR) Facebook has been ablaze with a story shared by Caymanian mother of two Salema Solomon Berry of her struggles with getting her damaged vehicle repaired after it was allegedly hit by a vehicle owned by the reigning Miss Cayman in August 2017.

The lengthy post was shared yesterday on her personal page and chronicles the year-long ordeal that has left her in and out of court and emotionally exhausted. Solomon Berry explains that her vehicle was hit by a Ford Escape (#154631). The ordeal began when she was collecting her daughter from school and the Ford Escape “ran head-on into my passenger side door. The same door where my daughter was sitting!!!”.

After getting over the initial shock of the accident Solomon Berry then explains that the driver was initially unwilling to take responsibility for the accident and even blamed Solomon Berry for “reversing into her”. At some stage, she accepted fault and provided Solomon Berry with “every single paper that was in the glove compartment”.

Eventually, Solomon Berry was given car registration and insurance paperwork. She decided to contact the police after realizing that the vehicular insurance expired three years earlier. Upon on arrival the driver, which was later identified as a current Cayman contestant, Tiffany Conolly, attempted to change her story yet again and blame the victim. Several police officers who were in attendance provided her with an analysis of the accident scene included a diagram that made her version of events impossible. After the police confirmed the insurance policy had lapsed she accepted fault for the accident and agreed to pay for the damages. 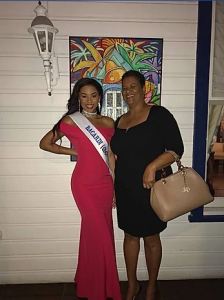 However, the ordeal was far from over at this point. The litany of additional shocking details as explained in the Facebook post:

“I later found out that in addition to not having insurance for the car, the young lady did not possess a valid driver’s license. Also, even if the car was insured, because the young lady driving at the time was under the age of 25, she was not covered under policy.”

In February 2018 Solomon Berry was contacted by court staff because the presiding magistrate wanted to know the status of the vehicle repairs before sentencing. She had been found guilty at a previous hearing and instructed to repair the damaged vehicle. Initially, Conolly refused to accept the two provided repair quotes; insisting that her friend could repair the vehicle. Given that the vehicle was still under warranty and only a few years old Solomon Berry did not believe this would be in her best interest.

Magistrate Donalds then informed her that the choice of where the repairs were to be sorted was left to the aggrieved party and not the responsible driver. She was then given 6 weeks to have the repairs done.

However, as the next date approached Solomon Berry reached out to Conolly only to be told:

“It looks like you get what the duck get”.

The ordeal was then switched to Magistrate Hernandez and the parties attended a third court hearing. Apparently, she informed the judge that “she went to the wrong garage and paid down on the quote. “

The court accepted this explanation with no evidence and granted her further extensions to repair the vehicle. Solomon Berry expressed her frustration at the entire process and observed in her post:

At the following court hearing, Solomon Berry had given up on ever receiving any justice via the court system and did not attend that court hearing. Again, Conolly was granted additional time to pay. The parties are scheduled to attend court again On August 29th and the manner in which the entire situation has been handled has left Solomon Berry wondering if preferential treatment is being handed down by the courts because the vehicle owner is none other than the reigning Miss Cayman, Anika Conolly. She remarked:

“Now it’s beginning to make sense why the court and the police were dragging their feet – the epitome of “it’s not WHAT you know, it’s WHO you know”.

The saga has left many wondering why the reigning Miss Cayman and the vehicle owner have not been held accountable for any of this.

The Facebook post has gone viral with CMR receiving it multiple times from various people. The overwhelming comments of support were met with a simple request – she merely wishes to have her car fixed and to have this year-long ordeal come to an end.

Thanks to everyone for their support. For the record, I want to make it clear that this was never about the pageant. I never acted maliciously and wish Tiffany the best in her endeavours for the crown.

I had hoped that we would have settled this matter prior to the pageant, privately, but the chances of that were looking slim to none. Also, when the Committee Chairperson and I spoke initially, I made it abundantly clear then that this was not about the pageant. I just wanted someone to connect with her and to encourage her to adjust her attitude and get her priorities in order. I didn't then and still don't want to make this about the pageant – I just wanted my car fixed.
To be fair, I now understand that the committee was under the impression that this issue had been settled and thus the reason for not getting back to me. But in all truth and honesty, they shouldn't have had to. This should have been only between Tiffany, and by extension, her mother, the Courts and myself. In the end, all I was trying to prevent was this carrying on because in the event that Tiffany is crowned on Saturday, does she really want one of her first appearances as Miss Cayman Islands to be in court with me trying to settle this matter?! I know I wouldn't but hey, that's just me. Thanks again to all for the support and well wishes. Hopefully, this will be resolved soon.

UPDATE: Cayman Marl Road is pleased to update that Mrs. Berry was finally able to collect her car last week Thursday, September 13 and it has been fully repaired now.

After another court appearance, Magistrate Philippa McFarlane made it very clear that she had 7 days to repair the vehicle or face additional consequences. Apparently, she took this magistrate seriously and the vehicle was repaired.

We also understand that she placed as 2nd runner up in the Miss Cayman Universe Pageant.