(CMR) A petition said to be from People Initiative Referendum Group has been called under fire by The Ministry of Investment, Innovation and Social Development’s Cyber Security Unit after they used the name of Cabinet Secretary, Samuel Rose. According to the ministry, they have requested that www.change.org remove and investigate an online petition that falsely claimed to be sponsored by the Cabinet Secretary of the Cayman Islands Government.

Chief Information Security Officer Pamela Greene wrote change.org today after becoming aware that the online petition was circulating. In her correspondence, Greene noted, “It is our belief that the petition is for the purpose of spreading misinformation, by originally claiming to be sponsored by the Cabinet Secretary.

The petition may also be for fraudulent intent, as supporters are presented with an option to donate $7 dollars to get it on the agenda.”

She urged members of the public to be aware of the potentially misleading intent of the petition, and encouraged any persons who may have signed, or made a donation in good faith, to report the matter to the Royal Cayman Islands Police Service.

Change.org is an online platform that allows users to generate and host petitions on assorted issues of public concern.

The petition was calling for the government to allow a referendum on the moot question of bordering re-opening before Christmas. The petition only acquired 356 signatures at press time. 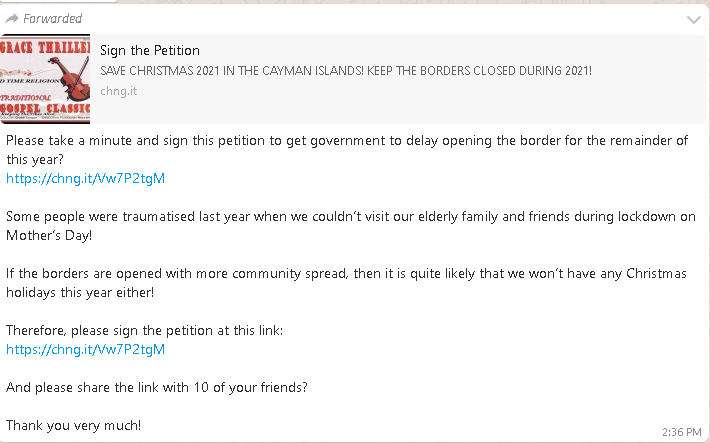 No, thanks.
How do you feel after reading this?
Tags: Fake NewsmisinformationSamuel Rose