(CMR) Margaritaville Beach Resort Grand Cayman (MV Advisory Ltd.) is being investigated by the Department of Labour and Pensions for pension violations dating back to at least 2019. As the debts mount it appears that the hotel will be rebranding and moving away from the Margaritaville name after a winding up application has been submitted to the court in accordance with section 92 (d) of the Companies Law on the basis that the Company is unable to pay its debts.

The winding-up petition brought by some property owners likely means that the employees and smaller vendors will need to make contact with the courts to ensure they are aware of their debts as well. Ironically, the Government would have been using Margaritaville Resort for the mandatory quarantining of persons during COVID-19.

The company claims it will be re-opening at the end of October 2020.

On June 28 an email was sent to staff informing them that work permits were canceled effective “June 2, 2020”. They claim no previous notice was given.

There are also numerous employees and vendors that have contacted us about the non-payment of bills into the thousands of dollars. One company is owed well over $30,000 and is unable to pay its own staff as they await payment on their outstanding invoices dating back months. 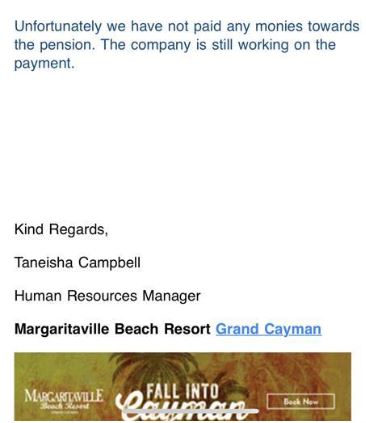 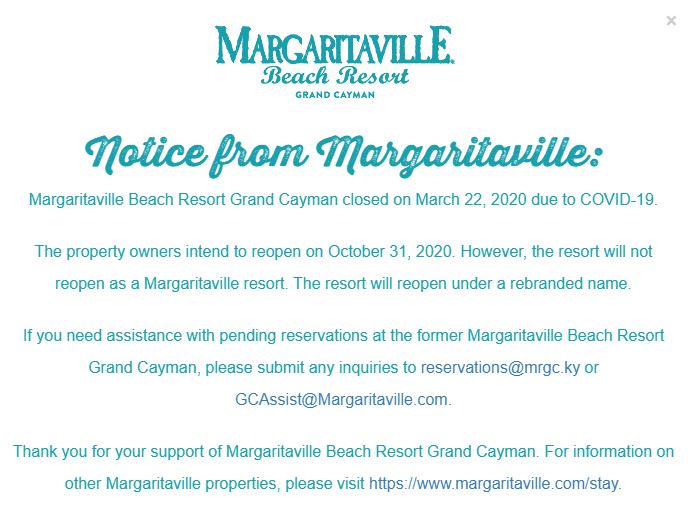 CMR received complaints dating back to early May from employees who were attempting to access their pensions with Britcay only to be shocked to receive confirmation that there was little money there.

Margaritaville Beach Resort had not made a payment into the pension fund since March 2019 for some workers. However, they were taking regular pension deductions from the employee's paycheques which were reflected on their payslips. Requests from the HR manager were met with little to no information.

“Some of us have been with the company for 2-3 years and Margaritaville has paid for less than 4 months worth of pension contributions. From the lockdown, we have received no assistance from them at all. This makes us all very sad and in dire straits. For them to not deposit our pension money and continually deducting it from our salary saddens all of us. This could provide a big cushion for many now during the coronavirus situation but we will not have that available to assist with our daily life and expenses. We are all disappointed with our management and the company.”

CMR reached out to the owners of the building which we understand are involved in the management company but received no comment from them. Darren Law is listed as the Executive Vice President of MV Advisory Ltd. According to his LinkedIn profile:

Darren is a seasoned executive with over 25 years of global professional experience in project development, hotel/resort preopening, operations, and asset management throughout the United States, Caribbean, and the Middle East.

The winding-up petition shows that a number of persons have not been paid distributions dating back to Q1 of 2019. On 19 May 2020, each of the petitioners served a statutory demand on the Company demanding the distribution of payment equivalent to the balance of the proprietor's account as at 30 March 2020 within 21 days and giving notice that thereafter interest would accrue. No payment was received.

Apparently both the pension administrators and DLP were aware of the breaches of the National Pension's Law and it remains to be seen precisely what will be done.

No, thanks.
How do you feel after reading this?
Tags: Darren LawHoward Hospitality GroupMargaritaville Beach Resort Grand CaymanMV Advisory Ltd.

ICE: Foreign students must leave US if universities go online for fall