(CMR) Logic issued a notice to customers today that they were issued a cease and desist notice from Hurley's Media which will prevent them from showing the Olympics on any channel that they have.

The email states that:

“Hurley's Media Group has received the sole distribution rights for the Winter Olympics here in the Cayman Islands airing on Cayman 27 and Island 24. As such a cease and desist order was issued to Logic that caused us to cease the airing of the Olympics on popular channels like NBC and CBC.”

Cable provider Logic is being forced to black out U.S. and Canadian channels providing coverage of the Winter Olympics after being served with a “cease and desist order” by Cayman Islands rights holder Hurley’s Media.

Hurley’s is broadcasting the event on Cayman 27 as part of an exclusive agreement with Jamaica-based International Media Content Ltd, which bought the regional rights for the event and the summer 2020 Tokyo Olympics.

As part of the deal, cable providers across the region are required to black out any other channels showing coverage.

Randy Merren, general manager of Hurley’s Media Ltd, confirmed that the company had given Logic until 10 a.m. on Feb. 19 to comply with the order. He local media on Monday that he believed the company had now met that demand

Ransford Ricketts, of Jamaica-based IMC, said it had bought the broadcast rights for the entire region and entered into various agreements with cable companies and broadcasters in different countries, including Hurley’s Media in the Cayman Islands. 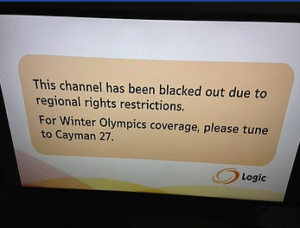 He said the broadcast rights of U.S. and Canadian channels screening the coverage, including CBC and NBC, do not apply outside of the North American region. Any broadcaster screening Winter Olympics coverage on any platform in the region, needs an agreement with IMC.

“We have to protect our rights and our investment,” he said.

“Our international partners expect that those rights that are sold to us are not breached and are fully protective.”

New evidence, including abuse of 17-y-o, to be brought against R Kelly
Cayman Mangrove Festival this Saturday
Chris Gayle releases new single
CayMAS Carnival 2021 is on!

Rapist given 13 years for violent attack