Stop abusing the marine life for the almighty dollar!

(CMR) Despite local operators often claiming little to no responsibility for visitors mishandling starfish at Starfish Point we have found sufficient evidence to prove they are encouraging the behavior on their various marketing platforms including websites and social media.

After posting some high profile images of people taking starfish out of the ocean to take photos with them many tour operators claim they are not to blame for the misuse of the creatures and that guests will go there on their own accord without a local tour guide. However, a quick Google search found plenty of evidence that local tour operators are complacent and are obviously totally disregarding the sea creatures.

One patron even bragged that her operator was booked via the prestigious Ritz Carlton where she stayed for her vacation.

People insist on touching, lifting, holding, moving and posting with starfish – all for their own pleasure and that perfect photo. They not only suffocate in the air but are also very fragile and are prone to mental stress. Yes … mental stress! As one website shared:

“Doing anything else than looking at starfish will harm them and in most cases, it will be the cause of their death.”

There are numerous websites showing these pictures as acceptable behavior instead of educating the general public about the fragility of these creatures. CMR advocates a no-touch policy to touching starfish and encourages the government to implement enforcement mechanisms.Â  There are some who believe that if they can handle them carefully and put them immediately no harm will be done. We found Robert Soto's Watersports website sharing the following: 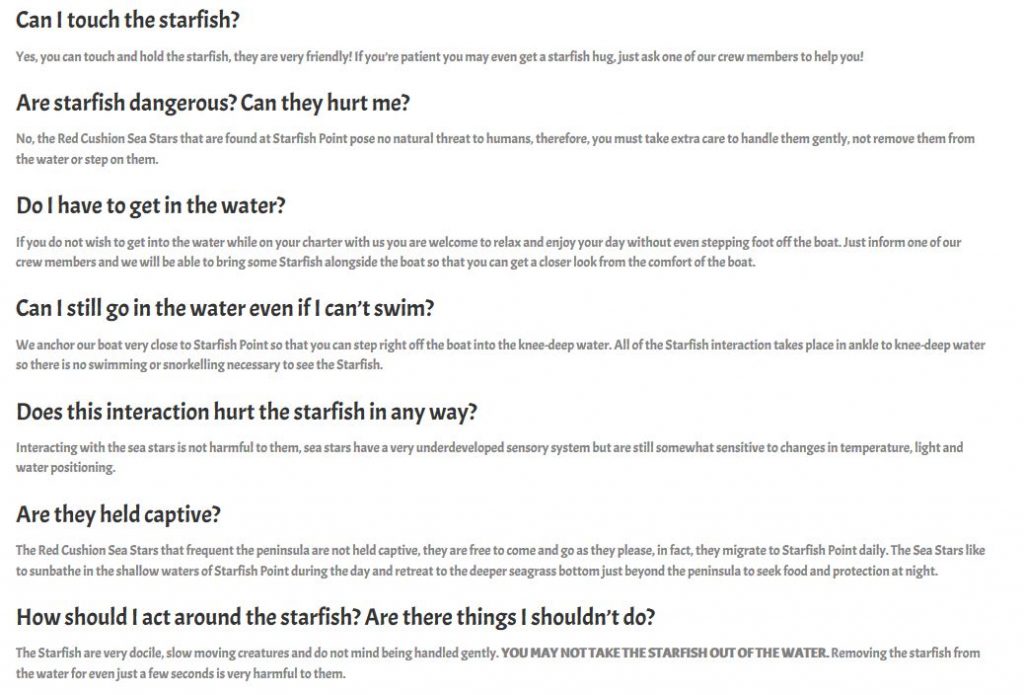 Visitors are being encouraged to touch and hold the starfish and even told that they are “friendly” and you can even give them a “hug”. In our opinion, this is high irresponsible marketing tactics. It's no wonder tourists say they had no idea that they are actually harmful to starfish.

Not to be outdone our own government appears to be part of the issue with a CIG website featuring a photo of two children with their mom handling starfish and having them partially out of the water. That site perpetuates the wrong message by sharing: 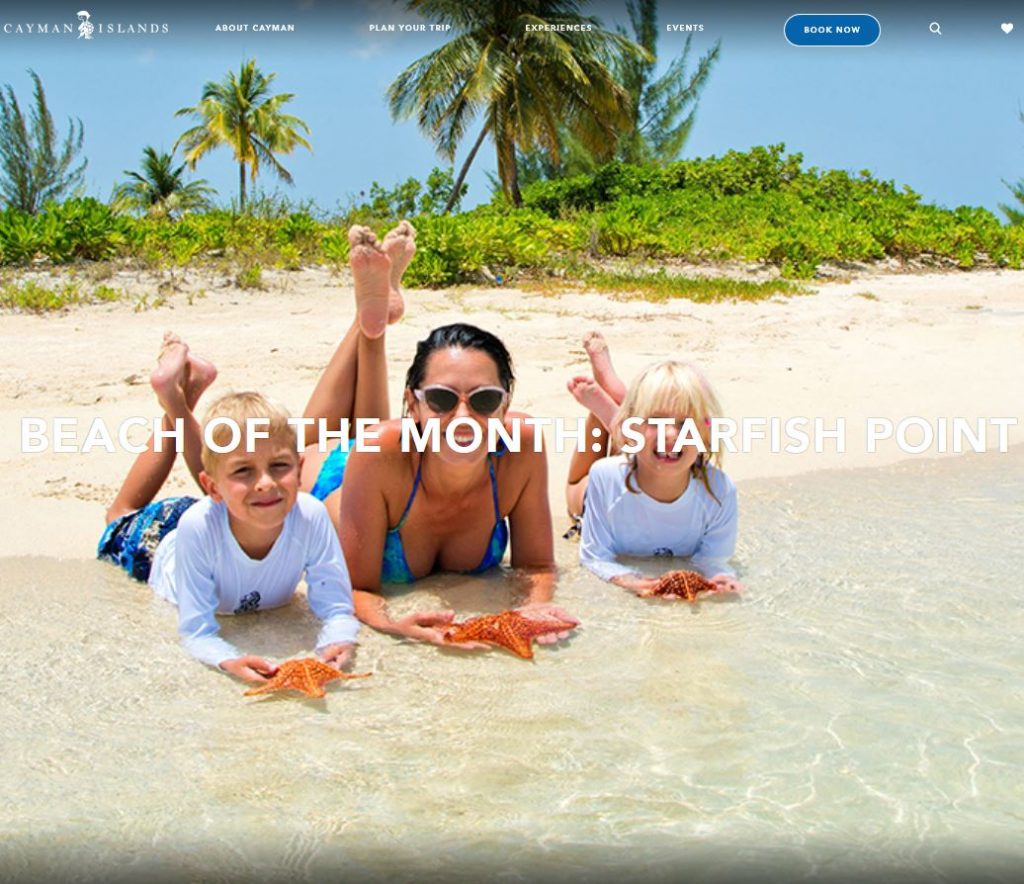 However, we should all remember:

“Human hands are naturally dangerous to all sea creatures due to billions of bacteria present in the hands of every human being, which can be harmful to them, leading to a possible slow death for these creatures. As every starfish is made up of soft and thin tissue, they can be highly contaminated with bacteria passed on through human touch.”

For some time now CMR has been attempting to highlight the need to educate the public about the dangers of handling the delicate sea creatures but it remains an uphill battle. Many visitors to Starfish Point seem to be more concerned about a photo op than actually the survival of the starfish themselves.Â  Once posted many claimed to have had no knowledge of the dangers to the starfish despite the publication of signs at the location to not remove them from the water.

â€śIt is okay to lift sea creature out of water as long as it is under 5 minutesâ€ť. That statement is so wrong and irresponsible. Some sea creatures might even just die instantly after getting touched by human, let alone being lifted out of water. There are so many explanations about it, and we will do it step by step.”

They go on to discuss the many dangers of handling starfish and other related sea creators. The bottom line is best expressed from other website:

Research says sea stars are the most important predators in the shallow ecosystem, feeding on sea creatures from the depths where people usually dive or swim. Their feeding activities control the whole ecosystem. If their kind dies from our mindless â€śtouchingâ€ť and â€śthrowingâ€ť, then their species become affected, which will ultimately lead to throwing the whole ecosystem off-balance because humans have removed a key component from the whole picture. Itâ€™s all science, and itâ€™s all true.

The bottom line is, we can always admire marine creatures but letâ€™s take time to remind ourselves but as humans, we should have a sense of responsibility when exploring the marine wildlife and handling sea animals. Letâ€™s encourage one another to respect the marine environment.

While the Department of Environment has issued warnings about the “mishandling” of marine life they do not appear to be willing to take a strong stance of an absolute no-touch policy. Perhaps its time we looked at the bigger mature – nature is finite and we as humans have done more to destroy it in the little time that we have been on earth than anything else. We can all spread awareness about being more responsible with marine life.
It is time our local tour operators educate themselves and their customers on the harm they are doing to the local marine life – if for no other reason than to protect their own livelihood for generations to come.
Five reasons not to touch marine life