(CMR) A local bakery has come under extreme public scrutiny after a social media post questioned the cleanliness of the facility and posted alleged evidence of a cockroach and rat infestation.

Our sources indicate that the police contacted the original poster and instructed her to remove the post and pictures from social media because the owner was unhappy about them.

There was some indication that they may take action against her and we understand the post was immediately removed.

However, several persons had already extracted and sent the images to CMR for reporting purposes. We have contacted the RCIPS to inquire as to how this would be a criminal matter and are now awaiting a response from them.

Meanwhile, the bakery, which Cayman Marl Road is not naming, provides baked goods for local grocery stores, schools, and several restaurants. In an amazing display of photos and video footage, the poster questioned the cleanliness of the facility and how they are allowed to operate under those conditions. 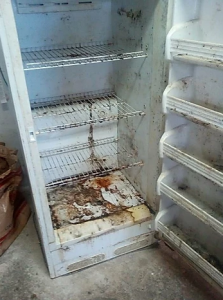 The bakery is also used by other businesses to bake their pastry there since they do not have access to a kitchen of their own. One person commented:

“That may be of no concern to them because culturally they do not believe in killing anything for religious reasons. But this is very unsanitary and given how many people are exposed to goods from these various businesses using the bakery I would think this would have been addressed.

It appears residents living in the vicinity of the bakery are aware of the infestation and informed CMR that part of the issue is that the exterior of the facility is also kept in poor condition with boxes and old baking debris not being properly disposed of for extended periods of time.

The facility has old equipment that is not operational and is full of rust and what appears to be mold and food stains – all within feet of where goods are baked. Several rats can be seen on a glue trap and baking metal containers are laying on the same flour.

There are allegations that rats are living in the roof and are running rampant throughout the facility. The photos and video evidence are a few months old and were taken late last year according to the social media post. Despite their concerns being brought to the attention of management; exclusive CMR sources have indicated that recently the floor was replaced but no serious steps were taken to address the pest control issues.

The video has become viral and CMR contacted one local merchant that purchases bread from the bakery. They were surprised to hear of the alleged issues and indicated that they would look into the matter further.

CMR has also contacted the Department of Environmental Health inquiring about the inspection log for the facility and if there had ever been any concerns or warnings issued against the facility. We are waiting for this information to be formally provided. However, our sources indicate that DEH did a site visit last year and issued a 30-day notice so certain renovations would have been carried out such as new tiles and partitions and methods of cleaning. However, our sources claim that a more detailed general inspection was not carried out.

CMR also contacted the bakery owners to send them an email but was told by the staff “they are old and don't have email or computers”. However, we are aware that the owner has told his vendors that this is a mischievous ex-employee and that is why he contacted the police.