by CMR
in Breaking News, Business
0

(CMR) John Felder, formerly of Cayman Automotive Leasing and Sales Ltd. (CAL), has been successful in obtaining a default judgment against Sandra Hill of CMR after she neglected to respond to what she claims was a “frivolous defamation lawsuit.” Ironically, based on official court documents Felder has left the company laced with debt after he failed to repay a number of loans. Creditor's claims for CAL exceeded $1.8 million which the liquidators found would not likely be paid.

CMR has released a series of documents to paint a clear picture of Felder's business affairs whilst in the Cayman Islands. This one focuses on the First Report of the Joint Official Liquidators (JOL) dated March 9, 2021. However, due to lack of funding the JOLs noted that their ability to investigate the situation to the full scope of their powers was limited.

“Action towards any wrongdoings by any parties may be limited, going forward, barring the realization of further funds.”

CMR can now disclose that the two-part joint liquidator report discloses that Felder himself has had multiple default judgments against him for non-payment of debt amounting to over $300,000 including a bank loan from Cayman National Bank. He further had a loan owed by Caymanian partner Randy Merren for some $300,000 which served as an initial capital injection in the company which was never repaid.

The picture painted by the report is one of continual non-payment of loans, non-deliverance of products to customers and lawyering up to constantly engage others in litigation.

Despite him winning on a legal technical which was not overturned by the courts CMR has produced multiple documents showing that Felder was (1) terminated from his employment with Cayman Automotive Leasing Ltd. (2) issued a cease and desist letter from the company claiming a number of serious allegations against him and (3) a settlement agreement after failing for years to deliver a vehicle to a client.

The JOL provides some amazing insight into the operations of both the company and Felder's actions while employed with CAL. The report notes that the company was incorporated in the Cayman Islands on January 20, 2005 and Felder was the founder of the company and its primary operating officer until in or around July 2019.

At the time of the liquidation of the company, Felder no longer worked for or had any shares in the company after transferring his shares to Larry McGean in July 2020. The report acknowledged that based on correspondence from Felder's attorneys's the share transfer agreement and its enforceability now appear to be in dispute.

The company appears to have been put in significant debt because of loans taken out by Felder and judgments against him for those. The liquidators noted that:

Felder had a default judgment against the Company and himself personally in the sum of CI$125,067.25 after failure to repay money borrowed to purchase vehicles. The report noted that “it is apparent that a sizeable portion of the judgment debt remains unpaid.” There was another judgment obtained on September 3, 2020 from Felder's cousin, Malcolm Gaskins for US$130,000 that he borrowed from him as well.

He also defaulted on a loan from Cayman National Bank who supplied proof of debt in the amount of $36,393.84. For that loan's collateral, he used two vehicles that were “already the subject of lease-to-buy-agreements. As was customary for Felder, his attorney's at Priestleys provided an explanation noting that:

The JOL report makes mention of the cease and desist letter issued to Felder. Interestingly enough he has a different date listed on his current website's page for the start of CAL.

“The JOLs are concerned by your failure to provide clarity on these two straightforward queries.”

They went on to remind him of his legal obligation to cooperate fully with the liquidation process. Despite waiting on his reply they noted that “not substantive reply was received from Mr. Felder or his lawyers despite a further email from the JOLs seeking substantive replies on 8 January 2021.”

The JOL examined Caymanian partner and majority shareholder Randy Merren's part in the company and noted that he provided information that he sought on multiple occasions to have his initial loan repaid. Since 2010 he was attempting to have the $300,000 loan repaid so he could cease being a shareholder in the company.

Merren noted that each time he approached Felder about the same he would state that he had an investor and wanted to renegotiate how the loan could be paid back. It never was. Instead, Felder attempted to get him to invest in his new company, Premier Automotive Export, but Merren refused.

Merren was also a signatory on the Scotiabank account which he “was not aware of … until he visited the bank in or around 2019 and was shown a signature on the bank's file which he states is not his.” He shared with the liquidators that he “believed his signature had been improperly added to the Company account without his consent.

Merren stated he was unaware of the CNB loan and that Felder did not hold any AGMs or meetings for shareholders or directors.

Merren revealed to the JOLs that Felder attempted to sell 40% shares in the company despite only having 11 shares. Merren was unaware of this agreement until Winston Connolly contacted him about Felder selling his shares to Connolly's client and receiving a “significant sum of money”. Conolly claimed that Felder was paid some $150-200,000 for the shares. As a result, McGean was prepared to “go after him (Felder)”. However, since he was off-island dealing with a grandchild that was born with a gene defect Merren agreed to transfer 50% of his shares to McGean.”

Maples, attorneys representing McGean shared that he had loaned money to the Company for the purchasing of cars but Felder failed to use the money for that purpose. This resulted in the loan agreement turning into a share purchase agreement instead. They also confirmed that Felder attempted to sell shares he did not have to McGean:

In this first report, the JOLs concluded that 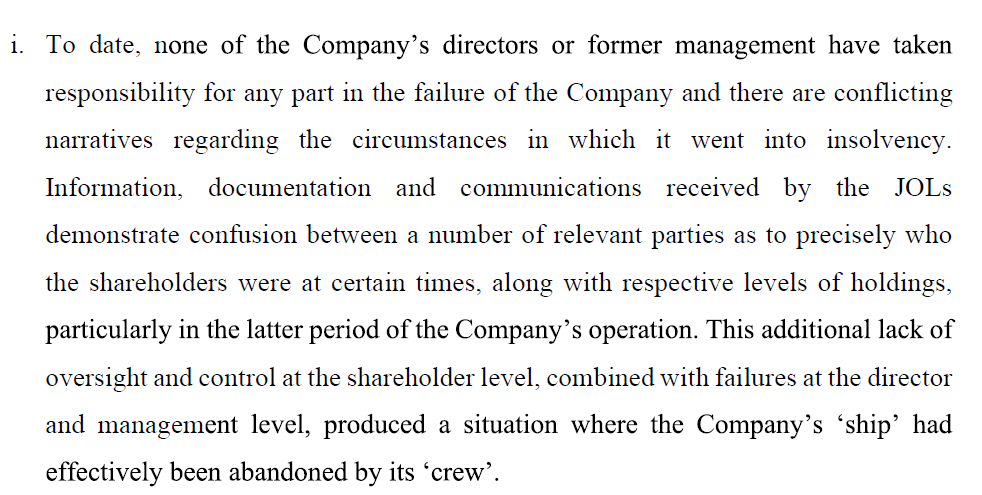 The entire report can be read here:

TO BE CONTINUED …
The Joint Liquidator's Report encompasses 2 large documents with the first one being 143 pages. As a result, this will be a multiple series story covering the key aspects of the JOL.

No, thanks.
How do you feel after reading this?
Tags: Cayman Automotive Leasing & Sales Ltd.John FelderPremier Automotive Export

Little behavior problems you should not ignore in your children