74
SHARES
2.1k
VIEWS
Share on FacebookShare on TwitterShare on Whatsapp

(CMR) The CMR harassment case continued via Zoom link on Wednesday with Matthew Leslie maintaining under cross-examination that he was not a public figure despite running for public office on numerous occasions and seemingly seeking out the limelight and living his life on social media.

Defense attorney, Clayton Phuran, asked Leslie a series of questions about his marital cheating scandal, admitted depression, and his very public gastric sleeve surgery – all which played out in the public eye in May/April 2017.

Leslie admitted that his weight loss journey was a public partnership with local Health City that was done to highlight his weight loss journey to help others. Pressed for whether living his life in public and running for public office made him a public figure Leslie did not agree. Instead, he said that he is now a private citizen and even whilst running for public office there were things that were private and should have been no concern of the public.

The same argument was used during his 2017 campaign when it imploded with allegations of cheating and sexting a local nurse; enticing her to come to visit him at Health City for $200 and cab fare. He maintained yesterday that the $200 was for her to fix her vehicle in order to visit him – despite him also paying for cab fare.

Every local newspaper covered the scandal at the time including multiple stores in Cayman 27 and Cayman CrossTalk. Leslie maintained that despite the media fury and social media commentary and memes surrounding the scandal he was not bothered by any of it because it was “the truth.” Despite the judge indicating the truthfulness of the crown’s key evidence, a February 25, 2019 podcast is not at issue here Leslie stated in court that in his mind the podcast is harassment because it contained “falsities and defamed me”.

Ironically at the time, many made the same allegations that were merely complied in the podcast regarding his behavior in the community.

The current matter is a criminal allegation of harassment pursuant to section 90(2) of the ICTA law and not one of defamation against Sandy Hill.

CMR was not in existence at the time so it did not cover the scandal.  Despite admitting he shares a lot of private matters on social media he dismissed the contention that he’s a public figure.

Leslie lives a very public life with almost 5,000 Facebook friends and over 55,000 Instagram followers. Every time he assists someone in the community, there’s a local death of prominence etc. Leslie shares it on his social media. He also promotes his business connections and events online. In fact, a Google search of his name revealed the top 5 results are from other media outlets.

Leslie shared that he had a potential investor who pulled out a project after viewing the expose podcast on CMR about his. In his opinion, the podcast was the cause of the investor’s decision and not his numerous civil court cases and significant allegations of fiscal irresponsibility that date back to 2012 and beyond.

Leslie was featured in the Belize Times in 2018 where they compared him to a convicted con artist developer that was embroiled in a previous airport scandal that saw him convicted on numerous fraudulent matters in Florida.

As it relates to Leslie he was attempting to secure a bid for the redevelopment of a new airport in Amergris Caye, Belize. Calling into question Leslie’s suitability the articles entitled “San Pedro Airport Scam?” and was prominently featured on the public page of the publication. It noted at the time: 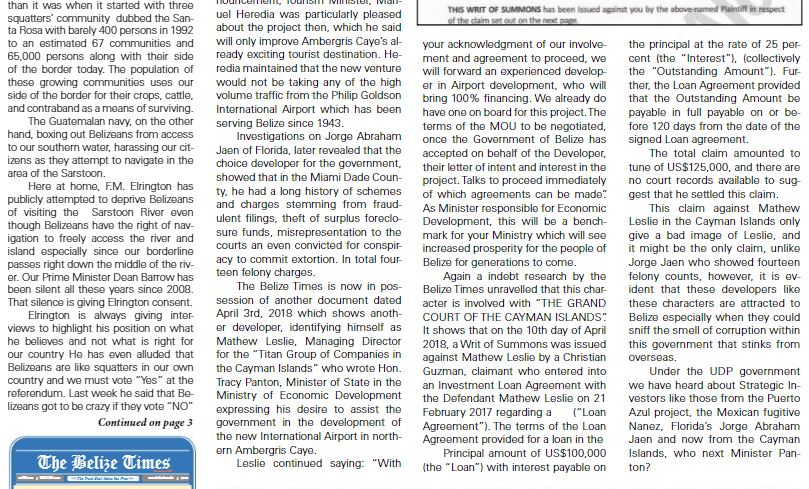 In relation to the same matter, Speaker of the House, McKeeva Bush, issued a statement that he was not in a partnership with Leslie after it was divulged that they had both been there in relation to the airport project. That was covered in a local iNews publication: 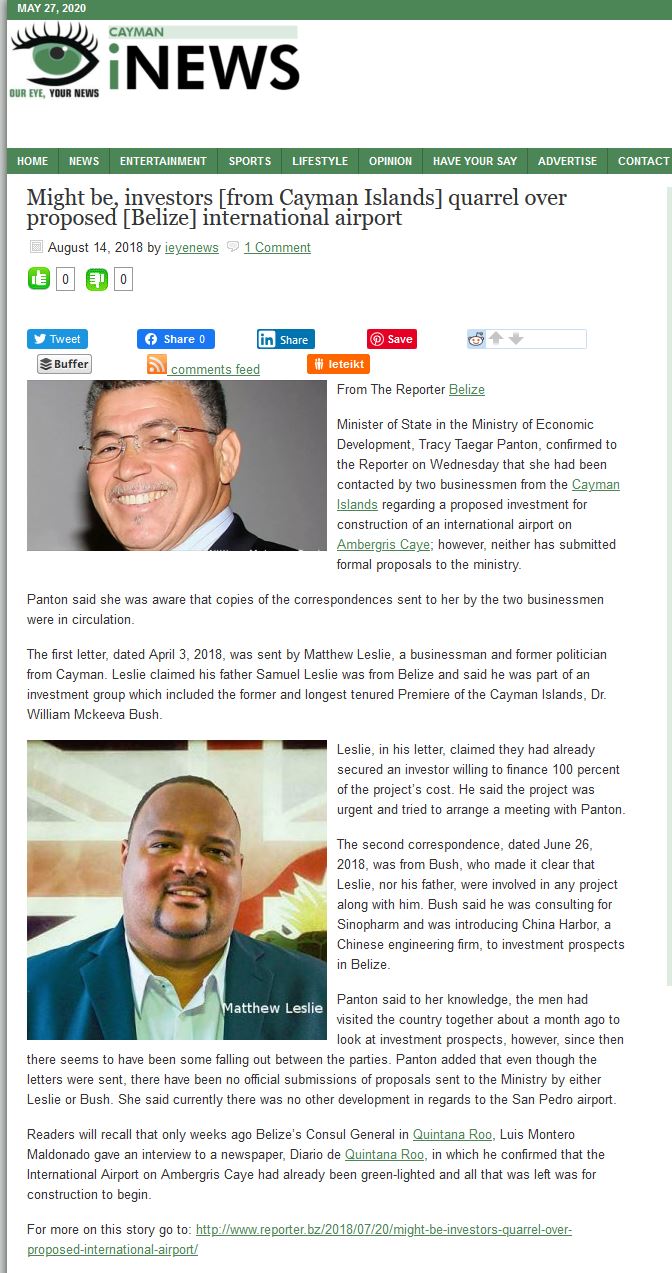