The shocking video clip is already going viral with people demanding she is fired. However, she quickly tweeted that she had gotten tongue-tied whilst trying to combine Knicks and Lakers to says “Nakers”. She shared:

“Please know I did not & would NEVER use a racist term. I apologize for the confusion this caused.” 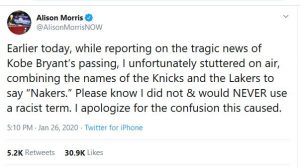 MSNBC anchor Alison Morris responded to a viral video on Sunday, trying to explain a vocal flub during a report on the death of former NBA star Kobe Bryant that many on social media took to be the N-word.

Not long after the news of Bryant’s death in a helicopter crash broke, Morris told MSNBC viewers that Bryant was “perfectly cast” on the Los Angeles Lakers, except she stumbled over the name of the team. Many believe Morris uttered the N-word but she said that is simply not the case.

Video footage of the alleged helicopter accident was also going viral.; but sources have confirmed that was from an incident some 12 months ago The crash claimed nine lives as the manifest has listed the pilot and eight passengers including Bryant and his 13-year-old daughter Gianna.

No, thanks.
How do you feel after reading this?
Tags: Kobe Bryant