All 176 people on board died

General view of the debris of the Ukraine International Airlines, flight PS752, Boeing 737-800 plane that crashed after take-off from Iran's Imam Khomeini airport, on the outskirts of Tehran, Iran January 8, 2020 is seen in this screen grab obtained from a social media video via REUTERS THIS IMAGE HAS BEEN SUPPLIED BY A THIRD PARTY. MANDATORY CREDIT.

(CMR) After days of denial, Iran's military finally announced early today that it had accidentally shot down a Ukrainian passenger jet killing all 176 people aboard Wednesday. In a statement, they shared that the plane “took the flying posture and altitude of an enemy target” as it came close to an Islamic Revolutionary Guards Corps base. It said that “under these circumstances, because of human error,” the plane “came under fire.”

Earlier Saturday, Ukraine's president had called for full admission of guilt for the downing of the plane that killed all 176 people aboard. Volodymyr Zelenskiy said he also wanted “a full and open investigation, bringing those responsible to justice, the return of the bodies of the dead, the payment of compensation, official apologies through diplomatic channels.”

A Ukraine Airlines executive said it was “absolutely irresponsible” that Iran did not shut its civilian airspace after striking American positions in Iraq.

They had initially blamed mechanical issues as the cause of the Boeing but refused to turn over the black box fo further analysis. International pressure had been building on Iran to take responsibility. American and allied intelligence assessments had already concluded that Iranian missiles brought down the plane most likely accidentally.

In what is seen as a “stunning reversal” amid international pressures Iranians on social media began expressing anger toward the military soon after the announcement. Many of them said it was the “harshest revenge,” to describe their outrage. “They were supposed to take their harsh revenge against America, not the people,” wrote Mojtaba Fathi, a journalist. 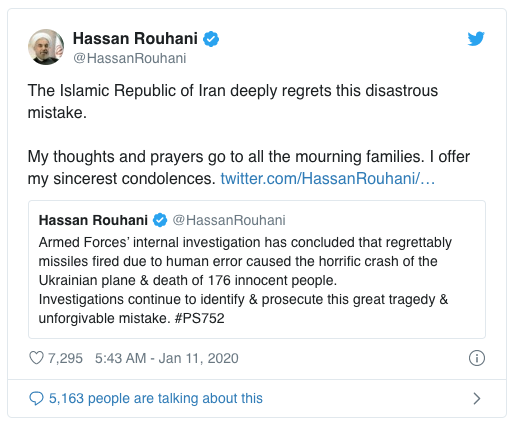 President Hassan Rouhani took to Twitter soon after the military released its statement and commented:

“The Islamic Republic of Iran deeply regrets this disastrous mistake,”

He offered condolences to the victims’ families and said investigations were underway. The military said the person responsible would face legal consequences.