Hundreds killed by typhoon in the Philippines

(CMR) Over 390 people have been killed in the Philippines following Super Typhoon Rai — known locally as Odette — which ripped through the archipelago late last week. At least 515 people were injured, and 56 were still missing on Tuesday.

Reports coming out of the country were that the death toll could climb as people were suffering from dehydration and hunger, and millions were still cut off.

More deaths are expected to be confirmed as rescue operations continue. But aid workers face the difficult task of reaching some regions cut off due to debris-filled and waterlogged roads, some with telephone and internet connections down, CNN reported.

“Homes are completely destroyed. We are trying to send urgent supplies, including water, food, and medicines,” Gordon said. “Communities have been completely cut off.”

Gordon said funds for emergency rescue efforts were urgently needed as “Millions are affected by this typhoon, and supplies are scarce.”

Rai, the 15th typhoon to hit the Philippines this year, made landfall on Siargao Island on Thursday with winds of up to 260 kilometers (160 miles) per hour; this is the equivalent to a Category 5 storm.

According to CNN reports, many preemptive evacuations and storm preparations began earlier in the week as the country started seeing heavy rain, but millions were still left vulnerable.

Rai reportedly ripped down homes, trees, and power cables in its path, bringing with it heavy rain, widespread flooding, and landslides. Communities were destroyed, and hundreds of thousands were left homeless by the storm. 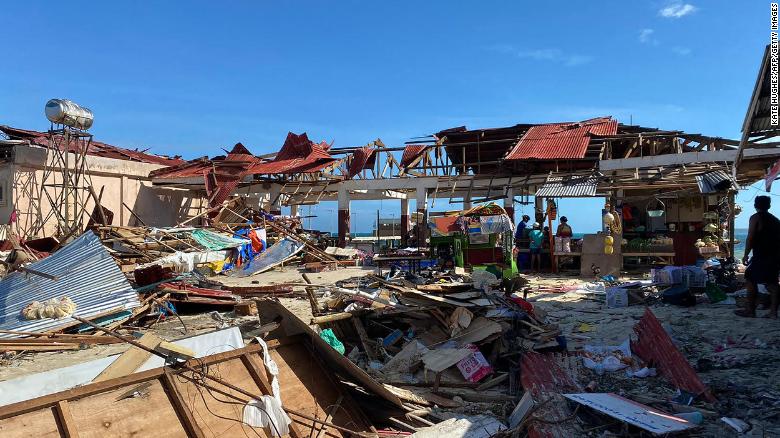 In Surigao City, one of the worst-hit areas, survivors were seen pleading on the roads for food and water.

According to Save the Children, at least 4.1 million children have been affected by the typhoon. It added that more than 16,000 families in hard-hit Caraga are estimated to be sheltering in cramped evacuation centers.

Jerome Balinton, humanitarian manager of the organization, said the risk of disease spreading at these facilities is of “great concern.”

“We are are starting to see the emergence of water-borne diseases, including diarrhea,” Balinton said. “Sanitation is a huge issue at these evacuation centers. With the Philippines still battling COVID-19, we worry for the safety of millions, including the most vulnerable children.”

Balinton expressed concern over the longer-term struggles that might arise from the typhoon's devastation, including food security and education issues.

“Although we haven't determined the extent of the damage yet, there has been widespread destruction to schools,” Balinton said. “Poorer, more vulnerable communities can be exposed to exploitation after this disaster.”

No, thanks.
How do you feel after reading this?
Tags: The Philippinestyphoon

(CMR) Sri Lanka's new prime minister Ranil Wickremesinghe announced Monday that the country was down to its last day of...

(CMR) At least 10 people were killed after a gunman wearing military-style clothing and body armor opened fire with a...

(CMR) A Paraguayan public prosecutor who led a string of high-profile cases against organized crime and drug trafficking was shot...

US couple sentenced to decades in prison for sexually molesting children

(CMR) A US couple who sexually molested young children and secretly filmed the abuse, sharing the videos with the former...

(CMR) German authorities have seized the world's largest superyacht in Hamburg after determining that it belongs to the sister of...

UPDATE: Sixteen people were injured, 10 suffering from gunshot wounds, in an attack at a subway station in New York...