Humane society rescue dies after being starved to death

Leaving many in community outraged

by CMR
in Fury Friends
0

“No animal should ever suffer so if you see something, say something. Report animal abuse to the Department of Agriculture.”

They shared a farewell post of an emaciated dog rescued from East End named Dessie. She died after being found in an unbelievable state of malnutrition and receiving treatment including a blood transfusion from the vets.

Despite their best efforts, they were unable to save her. The society's post shared that “Dessie was the victim of animal cruelty, she was basically started to death.” The Humane Society believes that the emaciated dog may have been dumped “after having been kept in horrible conditions.”. They expressed gratitude to Dr. Andrew and vet staff Kim and Khalid as well as shelter staff Jason, Letty and Barrie and other volunteers who tried to comfort the poor dog.

Donations towards her medical expenses or the shelter can be made o www.caymangiftcertificates.com

Several people reached out to CMR asking for exposure of what they say is ineffective administration and handling of such cases at the Department of Agriculture and the police.

One concerned person shared that they do not think that DOA is doing enough to protect animals. The police and DOA only have two full time animal welfare officers who many say are often overworked and unable to enforce what few laws exist. 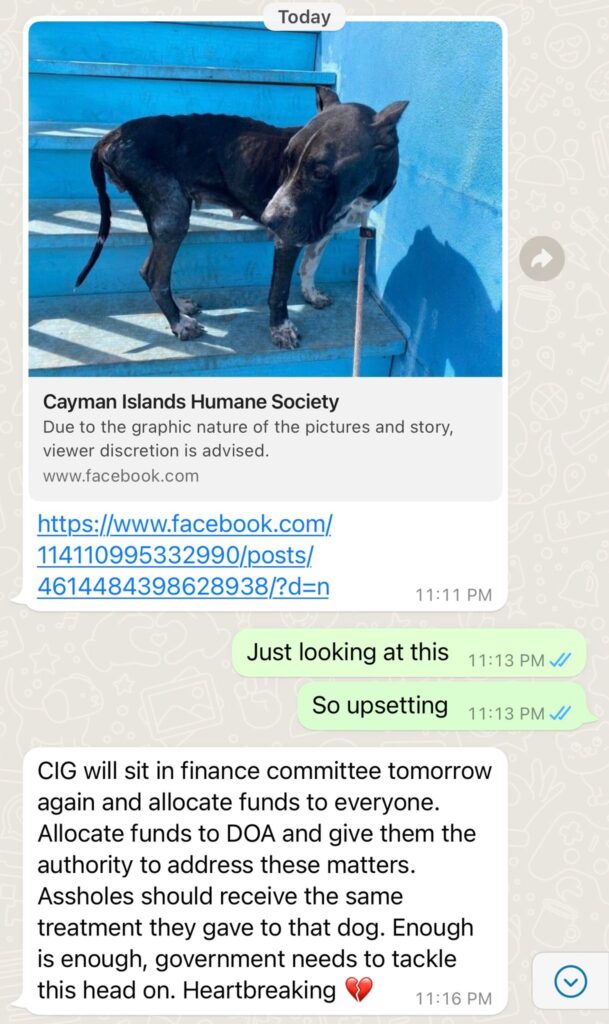 (CMR) The Department of Agriculture is reminding the public to be vigilant in its search for a raccoon that remains on...

(CMR) Calypso an African grey parrot has gone missing again - almost a year after he went viral for flying...

(CMR) A spate of dog poisonings has many in the community concerned after multiple dogs were found poisoned this morning in...

$1,000 reward offered for safe return of Ben the cat

(CMR) A $1,000 reward is being offered for the safe return of Ben the much-loved ginger cat missing from Waterways,...

(CMR) Residents in South Sound are pleading with dog owners to be responsible pet owners and not allow their dogs...

(CMR) Cayman Marl Road has received several videos and posts of a dog allegedly buried alive. In the footage only...