(CMR) A group of John Gray High School (JGHS) students have begun a petition on the enforcement of the school dress code as the community at large continues to debate the topic.

The petition was shared on social media this morning.

Some parents are considering a human rights challenge based on the new TAKE PRIDE IN YOUR STRIDE uniform rules and how they are being enforced. However, the students themselves appear to be more concerned about the wearing of hair extensions and earrings. The petition reads in part:

“We are petitioning the right to have hair extensions and wear earrings”.

The petition goes on to assume that the terms in the petition are negotiable and indicate that they will not wear beads or hoops (earrings) bigger than 3 centimeters. Whilst we are uncertain of who started the petition it has already started to cause some concern with parents who have seen it.

One parent expressed their disappointment in the petition:

“On the one had I'm glad that children decided to stand up for something. However, the wearing of hair extensions and earrings is the least of their issues. Neither of which I personally support in schools. We don't want the school administration to go overboard with measuring hair lengths on boys and looking for sections that may be cut a tad bit shorter. However, extensions and earrings? Not a priority”.

One father went on to say,

“In fact, I would have loved for them to protest over higher learning standards instead. Start a protest over the fact that when you come out of school you can barely find employment. That is worth protesting.” 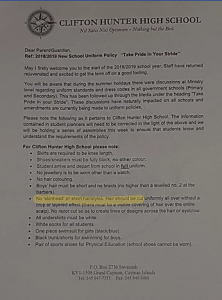 Cayman Marl Road received the petition today less than 24-hours after several students were sent home because their haircuts were not in line with accepted policy. Apparently, the entire cut needs to be in a uniform fashion. The policy given to us states that:

The larger debate on the enforcement of the rules continues as parents were disappointed when children were sent home on the first day. Initially, the three-strikes rule indicated that a warning should be given to the student but instead, Principle Pauline Beckford at Clifton Hunter High School sent a number of students home.

One parent said she had just paid for her son to get a haircut on Friday and was able to pay for him to go again until two weeks time. She was uncertain what the school would do but she also received the above letter. One irate student shared with us her opinion on the matter:

“I would think this should be more of a guideline but to specify that my child has to get his hair cut with a #2 razor and then measure his entire head to make sure that was done all the way around is idle and absolutely ridiculous. Teachers look like they need more actual work to keep them busy”.

Many parents have argued that this is unreasonable and taking matters to an extreme. The Minister is consulting with her administrators but there has been no official response from the government or education department.

14 persons take advantage of immigration amnesty ahead of deadline