(CMR) Governor Martyn Roper has acknowledged the strong Caribbean support for the UN General Assembly resolution regarding Ukraine on Wednesday. Mr. Roper, who said Cayman was supporting Ukraine through sanctions against Russia, issued the following statement: 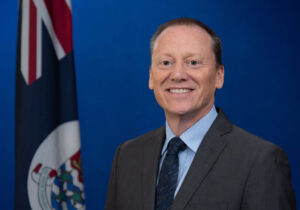 On 2 March, 141 countries voted in the United Nations deploring Russia’s invasion of Ukraine and calling for an immediate withdrawal of Forces. Within our region, Cuba abstained, but every other Caribbean country voted to deplore Russian aggression. Only five countries voted against (Russia, Belarus, North Korea, Eritrea, and Syria).

First time in 40 years, the ‘Security Council’ has referred a crisis to the Assembly, and only the 11th time an emergency session of the UN General Assembly has been called since 1950. The initial General Assembly resolution was co-sponsored by our Caribbean neighbors: Antigua and Barbuda, Bahamas, Belize, Dominican Republic, Grenada, Guyana, Haiti, Jamaica, Saint Kitts and Nevis and Trinidad and Tobago.

The situation in Ukraine is deeply worrying. As families shelter from rocket attacks, and paratroopers drop on a Ukrainian city, and Tank columns are on the move, the number of refugees seems to be in the region of well over 1 million.

From our perspective in the Caribbean, it is worth acknowledging there were disturbing reports that suggested those with African or South Asian heritage or ethnicity were being discriminated against at the border. The UK Government – and others in this region – have received absolute assurances from the Ukrainian Government that this is not sanctioned and will not be tolerated and that all will be treated equally.

The UK and all of us in Cayman support the Ukrainian people’s right to choose their own destiny.

The UK has launched the largest package of sanctions in the UK’s history – sanctions that we in Cayman have already brought into force. Cayman is supporting the international effort to cut off funding for President Putin’s war, including banning aircraft owned or operated by a person connected with Russia or registered in Russia.

The Kremlin’s unprovoked aggression has led the Russian people into a quagmire and, as demonstrated today, turned Russia into an international pariah. The world community now stands against them and in solidarity with Ukraine. The Russian Government’s attempt to conquer an independent state by force of arms is an attack on the security and freedom of Europe, but it goes far wider than that. It’s an attack against the international order and its impacts, particularly if President Putin were to prevail, will be felt globally should dictators, and those who see themselves as the ‘strong’ set against weak neighbors, believe they can act with impunity.

We can all be proud of the Ukrainians who are resisting. We in Cayman are supporting in the only way we can through the swift and effective imposition of sanctions against those who wage war against democratic neighbors.

No, thanks.
How do you feel after reading this?
Tags: Governor Martyn RoperRussia-Ukraine war

(CMR) The Customs and Border Control Detention Centre is now at capacity, and in accordance with the Mass Migration Contingency...

(CMR) The Department of Agriculture is currently hosting a four-week training session aimed at introducing and equipping homeowners with the skills...

(CMR) Minister of Agriculture Hon. Jay Ebanks will visit Jamaica from May 11 to 18 for bilateral meetings between the countries...

(CMR) The Deputy Governor of the Cayman Islands, Hon. Franz Manderson has found that there were no breaches committed in...