GOP leader who fought against vaccine dies from COVID-19

(CMR) Pressley Stutts, a Republican leader in South Carolina who fought COVID-19 vaccination efforts, died on Thursday after battling the coronavirus, including six days spent on a ventilator.

According to the Greenville News reported, Stutts, who had the virus for over a month, was rushed to the hospital on August 1 along with his wife after developing breathing problems.

Stutts, a 64-year-old veteran, frequently shared conspiracy theories about the virus, the vaccines, and the 2020 election on Facebook, including in posts made from his ICU bed, HuffPost reported. 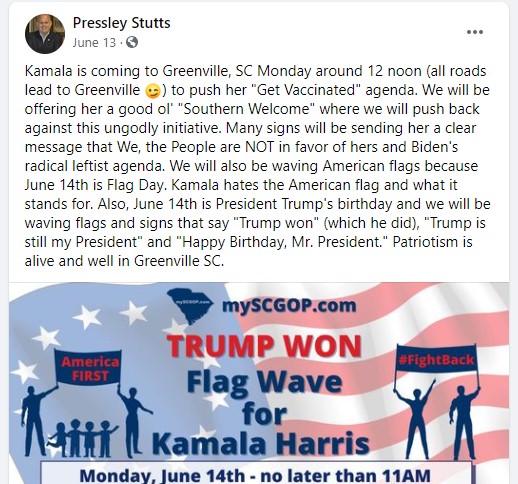 Stutts posted conspiracy theories about the virus online, stating that “if this virus is so deadly, why aren't essential workers dying at an alarming rate. He also reportedly dismissed masks as an “illusion,”  and claimed that there had been no increase in deaths in 2020, and said, “the medical-industrial complex has gaslighted the American public.”

Stutts also supported a state effort to strip funding from schools that imposed mask mandates or testing requirements. He was also upset when incentives were offered for vaccination, telling his social media followers not to sell their bodies or souls for the asking price.

In July, Stutts shared a Facebook post dismissing the delta variant, which was likely the one that ended his life, HuffPost reported.

On the day he went into ICU, Stutts insisted he had “always contended that COVID was very real” and called it “a deadly bio-weapon perpetrated upon the people of the world by enemies foreign, and perhaps domestic.”

No, thanks.
How do you feel after reading this?
Tags: covid-19

(CMR) US basketball star Brittney Griner was sentenced to nine years in prison after she was found guilty of drug...

(CMR) Spain had two monkeypox-related deaths over the weekend, recording the first confirmed fatalities from the disease in Europe since...

Kia owners may be eligible for free replacement engine

(CMR) People who drive a Hyundai or Kia may be eligible for a free replacement engine under a recent class...