Fyre Festival – Could Cayman be next?

4
SHARES
120
VIEWS
Share on FacebookShare on TwitterShare on Whatsapp

This week the promoter of the failed Fyre Festival in the Bahamas plead guilty to wire fraud charges and has agreed to serve up to a decade in prison for lying to investors and sending false documents. His event was coined the “cultural experience of the decade” – terms that sound all too familiar to our own local promoter Matthew Leslie!

One of several carnival investors that lost their investment

A lawsuit just filed in Los Angeles called the festival “nothing more than a get-rich-quick scam.” The similarities are striking! It was the sort of event that many wanted to be involved in. The festival was promoted as an ultra-luxurious event on the Bahamian island of Exuma over two weekends last April and May. It was promoted on social media by Kendall Jenner, Bella Hadid, Emily Ratajkowski and other models and celebrities coaxing people into buying ticket packages ranging from $1,200 to over $100,000.

He has now been ordered to pay back $26M to investors.

“I grossly underestimated the resources that would be necessary to hold an event of this magnitude,” he said.

Caymanians have long said “pick sense from nonsense”. In other words, have the power of discernment to know when someone is selling you a bag of rocks and claiming that it’s solid gold bars. Many think that common sense would prevail and that it would be quite obvious when someone is being dishonest or running a scam. However, a really talented con artist can deceive many before time finally catches up with him.

The scammer operates off of our emotions. The emotional connection people have for carnivals and the childhood memories that it elicits. If you listen careful promoter Leslie used those very same tactics in selling this event to the Cayman people.

THE LIE: On November 17, 2017 Leslie posted on his Facebook page that he spent $600,000 setting up an office etc. in order to bring the carnival here.

THE TRUTH: This was in response to CMR calling him out for doctoring a photo of a container. In typical narcissistic fashion he jumped on social media and attacked myself and this publication. Then he ran to his lawyer with his new found investor money in attempts to shut us up from exposing the truth. Despite admitting to what was alleged he argued you shouldn’t read too much into it because everyone could see it was doctored.

On November 15, 2017 he started a series of emails to the Ministry of Tourism, Cayman Islands Port Authority board members and port director asking for a waiver of port fees for an estimated KYD $16, 874.00 for the incoming shipment of carnival equipment. Total port and handling fees were later confirmed to be $36,000.00 for the incoming arrivals.

“this event is quite possibly one of the most highly anticipated events ever in the Cayman Islands.” 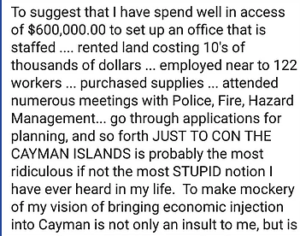 Later in January he then argued with the government that the port fees charged were actually incorrect and he was billed for services never rendered by the port – they were asking him to pay double what was actually due. The port eventually proved what was owed to them and it was correct the entire time.

My confidential sources indicate that government waived part of the fees amounting to roughly $17,000.00.

THE LIE: In that same series of emails he claims that he will be providing jobs to “nearly 100 Caymanians”.

In his social media post above it said near to 122 people.

In documents provided to Cabinet on January 14 he claims to have employed “207 Caymanians in temporary work positions covering work periods of 2 weeks up to 2 months”. Later in his financial breakdown he claims to have spent CI$351,999.00 in salaries for those persons but there are not 207 people listed.

THE TRUTH: We will never know how many Caymanians were actually employed by the Carnival and what they were actually paid. We spoke a small sampling of persons listed in this document.

One persons didn’t even work with the carnival despite being on the list. She replied:

I didn’t actually work with him; I decided not to. I really don’t want to speak with anyone about the carnival.

She abruptly hung up the phone.

Another person said she didn’t work very many hours because it was slow:

THE LIE: In his CNS interview he said that the carnival company he was working with is Midway Carnivals. Read full story here.

THE TRUTH: There is no carnival provider called Midway Carnivals. There is a Carnival Midways which is only a directory of traveling carnivals around the USA. The website can be found here.

In fact he was dealing with a company called Paradise Amusements out of Ocala, Florida. They pulled out of the deal in November because he had not committed to event with a signed contract. When it was eventually sent the company explained there was not enough lead time for them to proceed as their policy is 2 months.

Discussions began in early July and the owner of that company shared with me that he spoke to Leslie “at least 500 times” during those months and there was no firm commitment from him. 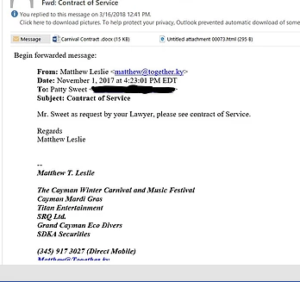 As a courtesy, they referred him to Amusements of America out of Monroe Township, New Jersey. They were ready to send carnival equipment to Puerto Rico before disastrous Hurricane Maria hit. Therefore, they were in a more flexible position and able to come here on short notice. However, they are now having issues with damaged equipment that was returned to them and unpaid invoices.

This also explains why rides like the Gravitron, Twister and Viper which were originally promised never made it. Read CNS interview here.

THE LIE: In his email to the Port Board Chairman and CEO on November 17 he stated that he would be making monetary donations to “16 charities with fund being donated”.

On the Cabinet documents he listed 10 organizations one being a local business. He claims in total they received sponsorship and/or free entry tickets valued $182,660.00. Total number of free entry persons supposedly was 9,133.

THE TRUTH: We have contacted them all and to date NOT A SINGLE PTA/NGO received any tickets from Cayman Carnival or Matthew Leslie. Several of them have contacted him asking for a retraction of this statement.

He has ignored some email correspondence and responded to others offering them a free lunch. We have seen correspondence from some of these entities demanding a retraction and thus far none has been forthcoming.

Some organizations rely heavily on funding and fiscal accountability is pivotal to them. Providing misleading information that an NGO received a donation in goods/services is a serious matter.

THE LIE: CMR is somehow to blame for his failures with the carnival. In his cover letter to Cabinet he stated that “due to false and slandering write ups by an online publication known as Cayman Marl Road – it was made very difficult to secure financial sponsors.”

THE TRUTH: Leslie was unable to secure sponsors because many people in the Cayman Islands are already well aware of his reputation for taking on investors and misusing investor funds to fund his life style as well as not paying his bills for the events themselves.

The CMR article did not run until mid-November when it was posted that he doctored a photo – which he later admitted to doing. At that stage, the equipment was in route as that was the point of the article.

Investors should have long been on board. Imagine his financial position was so bad that he was able to acquire a Range Rover and manage to give away $182, 660.00 in tickets. If an event was not successful would you be giving away tickets? Would you be telling the media that you had over 30,000 persons attend the carnival and it was a huge success and at the time same telling cabinet it was a failure?

At that stage, any legitimate promoter would have had his finances sorted for the event long before November and investors on board.

Vendors including hotel chains, liquor suppliers and other event suppliers refuse to provide him with any line of credit and insist that invoices must be paid in full before goods or services are rendered – this is not a new development at all. He approached some potential investors who had dealings with him prior and they refused to get involved in this venture.

There are other investors who have contacted us because they have been given bounced cheques and remain unpaid. We can confirm they were brought on as investors in October – long before our article. One lamented:

“I wish I had seen your story first about this man – I could have saved myself a lot of headache and legal fees.”

He also claimed that over 30,000 people attended the event and he injected $1.3M into the local economy. View here.

THE TRUTH: The venue was not yet secured when this interview was given and he could only secure an empty lot next to Cost U Less that was about 2 acres.

THE LIE: When asked about safety and setup he replied “We will have 55 people on the ground here from the carnival company.”

THE LIE: Amadello Mena is his organization’s CFO.

THE TRUTH: He is an accounts clerk at a local bank and does not have the skills or training to be a CFO for any organizations. No financials were prepared by him as CFO and expenses were not documented or tracked even in a simple format such as QuickBooks.

THE LIE: He is unable to fulfill his current overseas liabilities to Amusements of America because Paradise Amusements has a sizable deposit for him.

THE TRUTH: No promoters pays a deposit without the contract being signed. Paradise Amusements would have been in breach of contract and in some serious legal trouble. Instead of using this as an excuse to not pay a bill he would be taking legal action against them.

Picking sense of this one is quite easy. The hard question becomes at what point do you stop allowing excuses for every deception? The carnival business as it turns out is a small community and they all talk and know each other. Given the deceptions with this event we have been told it would be unlikely Cayman would ever get another carnival.

So much for bringing back an old tradition from 22-years ago! We may have to wait another 22-years to rebuild our reputation as a country and hope that they are able to forget this disaster.

It doesn’t take very much for us to develop a reputation for events that we cannot recover from. At the moment people in the Philippines remain unpaid for Island Rumble 2017 and our name has been marred there.

Our initial sentiments on the carnival being yet another con were spot on! Yes, the carnival did come to the Cayman Islands but at what cost? The con is much like the Fyre Festival – they delivered something – but with all the deceptions and lies what was delivered was a bag of rocks – not an event to build on.

Will these non-profits now step forward to tell the truth or will they allow their names to be intertwined in lies?

Are we waiting to have an event failure the size of Fyre Festival before we wake up?

Note: Sandra has been threatened with legal action and physical harm by Mr. Leslie but insists on signing her name to this post which she personally penned herself. This is a multi-part series and other posts will follow.

Is lying on a non-profit in order to gain fraud?