(CMR) A political effort to assist homeowners in Windsor Park with water access has ended with many questioning the motives of their district representatives.

The campaign as announced around 8:00 pm tonight and has since backfired after residents arrived at the community park to be subjected to photographs being taken of them. Desperate homeowners were very perturbed after being without water for over twenty-four hours.

CMR has received numerous complaints that they were advised to come to the park around 8:30 to collect water. Despite not being told how the water would be distributed over one hundred people showed up. This has now caused a row in the local community because the organizers appeared to be more concerned about having photos taken than truly assisting the people. 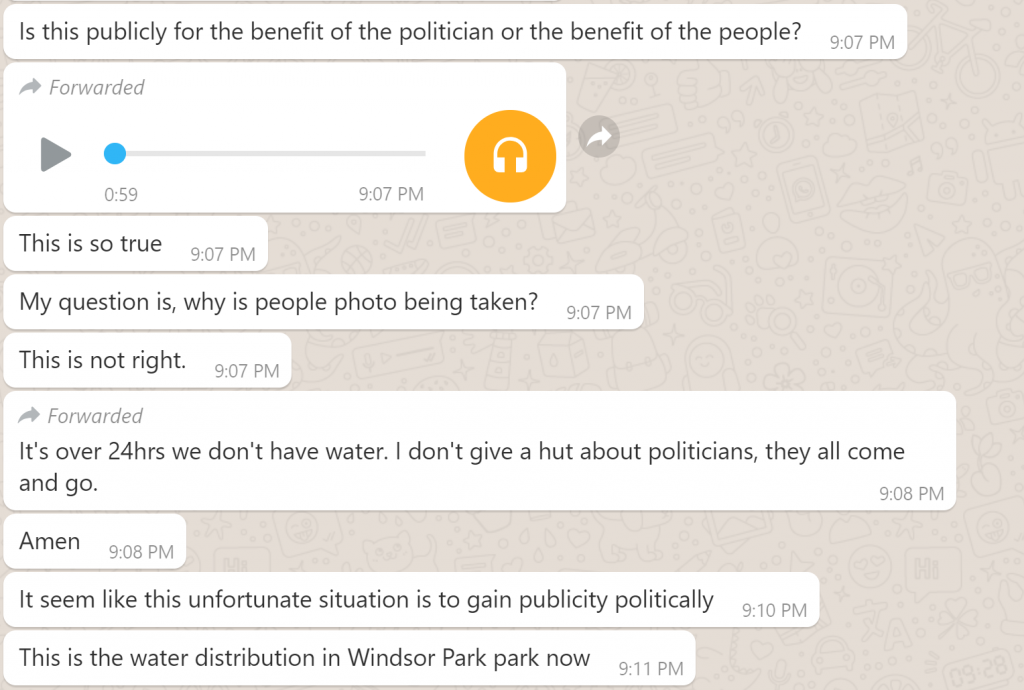 After 9:30 pm complaints continued to be received that no water has been restored to the area.  The Water Authority issued a statement earlier this evening that they were continuing to address water leaks and were not confident of a completion time for that area. The outage is due to leaks in their supply line after yesterday's 7.7 magnitude earthquake hit the island. They shared late into the evening that:

“Water service has been restored to all areas, with the exception of Mary Read Crescent, off South Sound Road and parts of Windsor Park. Due to the complexity of the repairs required, as a result of sinkholes in the areas, further restoration efforts will need to take place to get water service back up-and-running in these areas. Our Operations crews are continuing to work diligently to restore service to the affected customers in these two areas.”

They further reminded clients that customers may still experience low water pressure or intermittent service, as our restoration efforts continue. Should there be more aftershocks, further disruptions may be possible.

Areas without water include Outpost Street and July Street. Hawkins's Drive was only recently restored. Many residents were perturbed that people who may not have even had the ability to shower in the past day were then subjected to what they say as disrespectful treatment.

The rest of the Cayman Isalnds appears to have been restored.

Italian cruise ship on lock down amid fears of coronavirus - 7,000 persons trapped