(CMR) The Philippines has been hit by a catastrophic Typhoon that has left almost 400 people dead and more than 600,000 people homeless.  The Cayman Bayanihan Filipino Community is organizing relief efforts from the Cayman Islands to assist communities devastated by Super Typhoon Rai — known locally as Odette after it ripped through the archipelago late last week.

At this time cash donations are being requested to reach the people quickest and provide the most urgent type of assistance required. Donations can be made directly to the bank of Butterfield account with a note that it is for the typhoon relief victims: 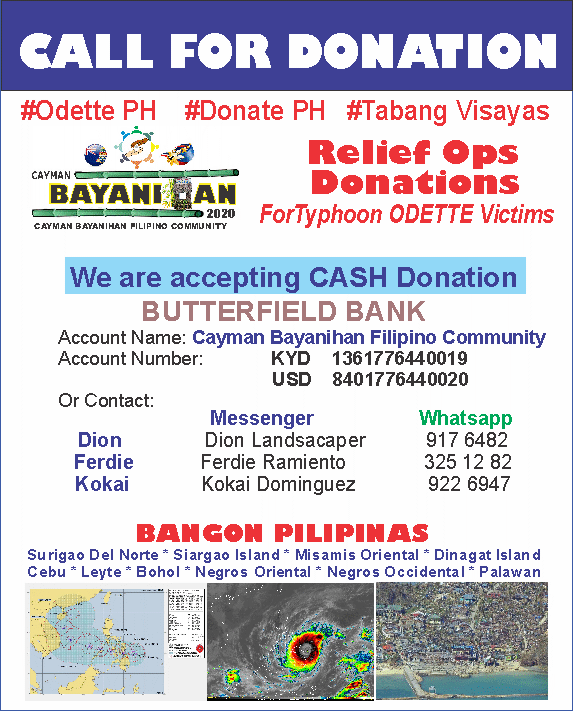 The extent of destruction was reminiscent of Super Typhoon Haiyan in 2013, the strongest typhoon to ever make landfall in world history, which killed 6,300 people in the Philippines.. This story is said to have caused damage in excess of $500m. Military airplanes and naval vessels were dispatched on Monday to carry aid to devastated areas.

Rai reached category 5 super typhoon strength twice. The first followed rapid intensification between 15 and 16 December, where maximum windspeeds increased from 75mph to 160mph. The second was across the South China Sea, becoming only the third storm on record to reach Category 5 strength across this region.

The majority of the deaths reported by police were in the central region of Visayas, home to dive spots in Bohol province, among some of the most popular tourist destinations, and the Caraga region in northeastern Mindanao.

(CMR) Liquor license holders who wish to renew their licenses have just a few days left to submit their applications....

(CMR) Premier of the Cayman Islands, Wayne Panton, said he intends to propose to fellow parliamentarians that Emancipation Day be...

Alan Slater recognized for helping to save child’s life

(CMR) Senior Investigator for police complaints Alan Slater was recognized by Ombudsman Sharon Roulstone recently for his role in saving...

(CMR) Three persons were rescued by the Cayman Islands Coast Guard (CICG) and the RCIPS Air Operations Unit after the...