(CMR) The Royal Cayman Islands Police Service has confirmed the victim in yesterday's vehicle collision was Geoffrey Cornwall (56) a resident on the island who was originally from Australia.

The accident happened yesterday morning around 7:30 am on West Bay Road between Yacht Drive and Batabano.

The revelation comes after both an outpouring of condolences and disbelief on social media as well as disgust towards the owner of the vehicle, Mario Blake (VibesTime). 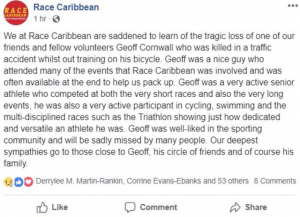 Cornwall worked at Bank of Butterfield as an IT Analyst and was known to be an avid cyclist and runner competing in various athletic events including marathons and swimming competitions. He actually placed 14th overall in the Intertrust Cayman Islands Marathon last year. He also placed third in 2018 Off the Beaten Track 50k ultra-marathon.

The owner of the parked Gold Mercedes SUV has garnered his fair share of criticism immediately after the incident when it was alleged that he posted a photo of the victim on his Instagram account under the rear of his vehicle allegedly stating that:

“This fool just ran into me!”

The public must have been immediate because shortly after that the post was removed with a seemingly more sympathetic one: 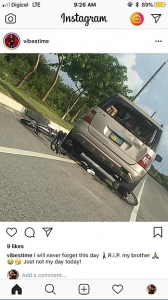 Whilst CMR does not have the original IG post others who saw that initial posting took to social media to call out Blake for the insensitivity of his post. 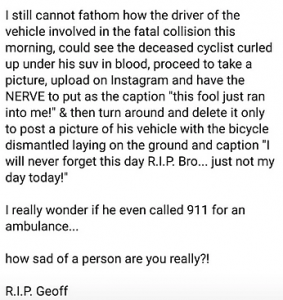 Although it appears that Cornwall ran into Blake's vehicle many have wondered why it was apparently parked in the bike lane.

The actual photo of Cornwall was widely circulated in various social media circles as the police graciously asked for people to be more sensitive about such things. Some people now believe that Blake is the source of that photo and have asked the police to intervene.

Blake is well known to social media drama after being involved in an IG social media row earlier this year with DJ Von; where he was called out for his behavior towards young girls – some allegedly under the age of consent. Blake is a photographer and much of his work has focused on scantly dressed underage or naked girls.

No, thanks.
How do you feel after reading this?
Tags: Geoffrey CornwallMario BlakeVibestime Entertainment

Hebe McKenzie (Baba) 100 dies - affectionately remembered by so many!