A driver involved in Wednesday's evening accident in the vicinity of Old Crewe Road/Kings Sports Centre roundabout has been arrested for leaving the scene of an accident but denies any further wrongdoing.

We originally covered the story on the evening of the event with photos and video footage here. Now Cayman Marl Road as an exclusive interview with the RAV4 driver who is being blamed for the accident.

The driver, a 35-year-old George Town resident, states that when heading home she was sideswiped by the white vehicle who then lost control and flipped several times. She was driving towards the Linford Pierson Highway off the roundabout when the other vehicle “plowed” into her and then flipped multiple times.

She pulled off the side of the road and waited for about 10 minutes until the ambulance was approaching. Unable to open her own door and being extremely shaken by the ordeal she felt as though she was having a panic attack and she then proceeded to go home to ascertain if she needed any medical assistance.

Her vehicle sustained front end and side damage.

At 7:00 a.m. the following morning she went to the police station to make a report. It was at that time that she was told that she would be arrested for leaving the scene of an accident.

I am a careful driver and this person almost caused me my life. I was badly shaken up and honestly didn't know what to do. I waited fora while and then decided to leave and contact the police first thing in the morning. I now the truth will be been on CCTV – as there's no way for that to lie.

She has been inaccurately described as the “estranged wife” of a former political candidate. In fact, she obtained an annulment which nullifies the marriage as though it never happened. 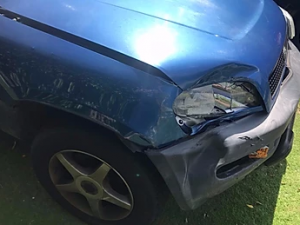