Photo: Farrell pictured here at his former workplace, Pedro Castle posing with a photo of his ancestor that lived at Pedro. He was a tour guide there.

(CMR) The 42-year-old George Town driver of a vehicle that collided with Bodden Town resident Carlton William Farrell that caused his death has been arrested.

Police have confirmed that he has been arrested on suspicion of causing death by careless driving and has been released on police bail.

Farrell (68) passed away late yesterday and the matter remains a full investigation. The incident happened to hear his home on Shamrock Road and close to Trumbach Drive. Eyewitnesses told CMR that the car actually veered off the road and hit Farrell.

Farrell is being remembered as the “sweetest kindest person you would ever come across”. He worked in the airline industry for many years for various air agencies and Northwest Airlines. He last worked at Pedro Castle before retiring. He is also the first cousin to Savannah MLA, Anthony Eden.

Mr. Farrell’s mother was an Eden by birth, and he grew up in Lower Valley with several extended family members living in the area, including his first cousin and National Hero, the late Hon. James M. Bodden Sr. His immediate next of kin is his niece Etty Farrell and nephew, Gustavo Farrell.

Many took to social media to share their sadness, shock, and disbelief at the traffic loss. 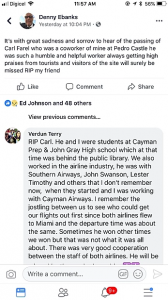 No, thanks.
How do you feel after reading this?
Tags: accident