(CMR) Donovan Wilson (“Sito) age 61-years-old was formally released last month after being arrested earlier in July on suspicion of possession of cocaine according to his daughter's Facebook page.

In a post of July 19 she posted a copy of the above letter with the caption:

” Ppl will walk over your name and judge by hear say and not by facts. …….#CaymaniansHabit! We been know better
???? #DonovanWilson formally released! “

“This man has been an upstanding member of the community for over 30 years and has held down a good government. I seriously doubt he’s capable of this.” 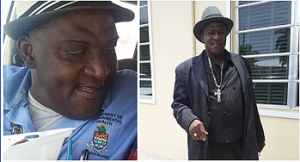 Ironically no one on social media believed the accusation either as many came to his defense stating it must have been a setup and the real perpetrator needs to be found.

The release letter from the RCIP clearly states that the investigation continues and that Wilsom may be called upon to assist with their ongoing queries. To date no one else has been arrested in relation to the matter.

Should any further updates be available we will surely provide details of those. CMR contacted the RCIPS but have received no response on the matter.

No, thanks.
How do you feel after reading this?
Tags: Donovan WilsonRCIPS