(CMR) Caymanian David Pitcairn (17) was recently awarded the title of Head Boy at Trinity College School in Port Hope, Ontario, Canada after just completing his first year. At the aware ceremony on May 16 it was stated the award is given to someone who has maintained an exceptionally high level of academic performance and exhibited strong leadership.

Pitcairn along with the Head Girl will now be the face of the school for the next year representing them at various events. This highly regarded achievement will also see him admired by his fellow colleagues at the prestigious co-educational private boarding and day school. They recently celebrated their 154th year.

Pitcairn has excelled at the school which he attends with his twin sister, Jade Pitcairn. Both completed their studies at Cayman Prep last year before embarking on this journey at one Canada's older and best independent schools. Studying a variety of subjects at the grade 11 level; he has also undertaken some grade 12 subjected. He noted that:

“I hope to attend university to study Sports Management. My two passions are business and sports, and finding a job that interlinks both of these is magic. My dream university for this programme is the University of Edinburgh where I hope to be enrolled in 2020,”

Pitcairn's love of sports is very much a family affair as both him and his twin sister participated in a variety of sports in Cayman including football and squash. He played was a member of the Cayman Islands U-15 National Team and member of squad at the 2016 CONCACAF international tournament. He also participated in the Caribbean Area Squash Junior championships since 2015 and was the Cayman U-17 and U-19 national squash champion. He continues to play squash at Trinity and already has received a distinction award for the sport. 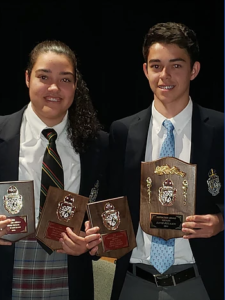 Not to be outdone his sister has been the eight times winner in the Junior Championship in Cayman (U13, U15, U17 and U19), has been ranked number two in the Caribbean Area Squash Association (CASA) for the past three years. Jade won two bronze medals at the Central American & Caribbean games and was this year’s 2019 Dept Sports Honoree and won the Coaches Award at squash a month ago at Trinity.

His parents; John and Theresa Pitcairn credited the twin's support system with each other as being critical to their successes thus far. Their mom, local attorney, Theresa, also acknowledged the competitive environment and high standards held by the school.

“It’s difficult to get a teaching post at Trinity due to intense competition. Teachers are not only qualified academically but it’s also mandatory that they love teaching, love kids, and have depth. The support staff is amazing. The school’s leadership is also visionary,”

Pitcairn's growth thus far can be evidence by this maturity when he explains:

“I love the exposure to a variety of cultures, from all over the globe and learning about different so-called ‘norms’,”

“I love learning how our Cayman Islands differ from or ranks in comparison to other foreign countries, but ultimately appreciating the importance of respecting others and their differences. Trinity has also taught me how to become more independent, self-reliant and organised with my time and academics. But despite having these amazing qualities, I still love to come home and ‘feed off’ of mom's cooking!”

With approximately 450 students Trinity College School's challenging academic program over four years of high school emphasizes a liberal arts philosophy. Students are engaged equally in the arts and sciences during their first two years of study. In Grade 11 and 12, students begin to specialize and many take Advanced Placement courses.

How to discipline your children without destroying their self-esteem
Celebrating great fathers
Raising boys vs raising girls
10 ways to raise a compassionate child
Tags: David Pitcairn