96
SHARES
2.5k
VIEWS
Share on FacebookShare on TwitterShare on Whatsapp

(CMR) The harassment trial against Cayman’s Marl Road’s host of The COLD HARD TRUTH began in earnest yesterday in Grand Court before Justice Chapple with the prosecution deciding to not pursue one of the two counts on the indictment.

The original indictment had Sandy Hill charged with:

Count Two – Causing harassment, Alarm, or Distress contrary to section 88(a) of the Penal Code.

Crown Counsel Darlene Oko confirmed that the latter will not be pursued by the DPP’s office but it would be left on file. The crown’s opening case is that Hill harassed former political candidate, Matthew Leslie, over a period of time in early 2019 when she did an expose podcast on him summarizing what she claimed was a  history of questionable behavior by Leslie.

The morning also saw the judge allow the trial to be available for online viewers. There was a slight misunderstanding during the morning session with CMR resharing the judicial website link. The judge clarified that he was not allowing re-sharing but interested parties could view the proceedings directly from the court’s link. The court had initially made it clear that no recording of the proceedings would be permitted.

Despite Oko confirming that prosecution witnesses were not permitted to view the live stream prior to giving their testimony viewers could confirm that Leslie had actually been watching the live stream before starting his testimony. 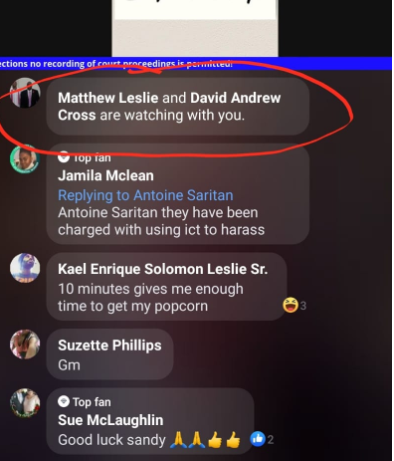 The court continues to discuss how to handle cases done via Zoom and the legal implications. Leslie was testifying via Zoom from Belize where he claims he is now residing and operating his family’s shipping business.

Leslie gave a history of his employment claiming that a RCIPS cadet he left the force when his contract was not renewed after two years. However, he shared that despite “low morale’ being the reason he left after a cloud of suspicion when his superior got an inmate in custody pregnant he still received a payment from the police of over $11,000.

He also shared he has opened several businesses and worked in marketing for Cayman’s local brewery, Caybrew. When asked why he left the company he claims that they did not want the political exposure of him running for public office.

He also shared that he is a businessman and political candidate that ran unsuccessfully in two general elections. He struggled to recall the nature of his relationship with Hill initially and details under what circumstances they met but summarized it was a business relationship.

The half-day proceedings were filled with Leslie giving his account of the circumstances that led up to the allegations against Hill. He claims that he was embarrassed by the expose and had people constantly looking at him in public and contacting him. When asked when the acquaintance between him and Hill changed his recollection was that it was in relation to a post he shared in November 2018 after an article was published about his Winter Carnival.

The proceedings ending earlier as the crown struggled to share with the court its key piece of evidence – the hour-long podcast. During the showing of the podcast, the judge agreed that the proceedings cannot be live-streamed despite it still being publically available for viewing.

All partiues are joining in via Zoom with the judge being in the UK and each party being at their own location.

Leslie will take the stand again this morning at 9:30 am and proceedings will be dreamed here

The trial is scheduled for the remainder of this week and the defense is expected to get to its cross-examination of Leslie today.

Parents livid that school makes no contact after children injured